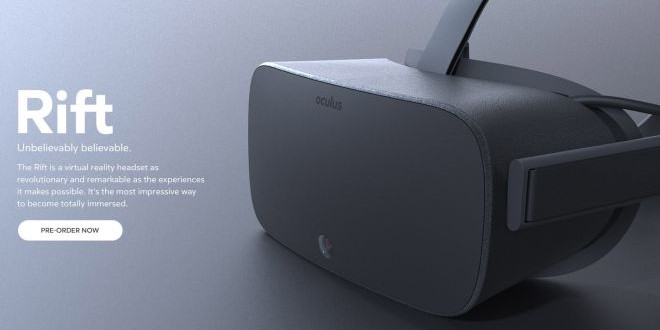 Since launching a new website for the Oculus Rift, the now-too-common natural progression of pawing and prodding at code has uncovered a number of hidden gems within the site. Most notably, the look of the Oculus Headset. Even without the uncovered “secrets,” the website is currently displaying a countdown to June 11th at 1pm EST; this is going to be the official Oculus Rift Headset release.

Within the code, a fan and Reddit user explogeek discovered multiple images that appear to be very official, and stylized, of what could be the final product. Images show the Oculus logo on the front of the headset, a stand to rest the headset on, and even a small remote/controller with a touchpad to navigate and some volume controls.

Oculus’ creator Palmer Luckey responded in Reddit confirming that the images are real, but outdated: “This is an old place holder concept image that we accidentally leaked… Everything in it is ancient, certainly nowhere close to final.” He also points out that the specs and the demo game called “War” is evidence of that.

While it’s interesting that Luckey doesn’t deny the images were or are real. Though there was also a helpful pre-order guide pulled from the site that has many interesting points for newcomers, gamers, and tech-heads alike. Near the bottom of the guide is a list of recommended specs for ideal performance:

With the Oculus website’s countdown continuing to run as you read this, the stream and press event will take place on June 11th, just ahead of E3. This may free up some space for the crew to show off the software being created rather than a straight hardware reveal. Expect not only some hands-on reports from around the E3 floor next week, but some major reveals in order to beef up excitement before the Q1 2016 release.