Breaking News
Home » Tech » The GV08S smart watch is for calling, texting and everything else 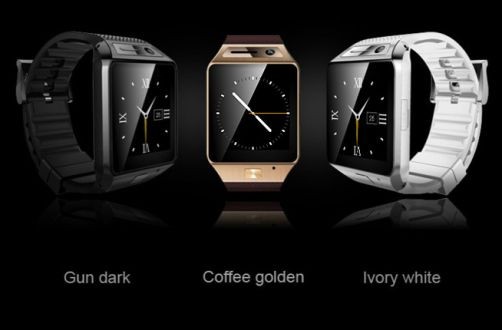 Nowadays, mainstream smart watch manufacturers like Motorola, Samsung, LG, Asus and Apple mostly try to introduce as many features as possible into their products, without compromising design or performance. It seems like many are afraid to take an example from Chinese smart watch makers, because too many features might not be compatible or useful with the OS that they use, namely Android Wear, TouchWiz or Watch OS. But Chinese smart watch makers are not afraid to step out of their comfort zone, and the GV08S is yet another great example of a feature-filled smart watch.

The $33 smart watch is packed with features, and the design of the device is also very appealing. If we were to find a similar product to the GV08S smart watch, it would be the Apple Watch. Although the timepiece is not as premium as Apple’s new iWatch, it still manages to offer an appealing design, for a tenth of the price of the Apple device, which does prove that neat gadgets can be found for affordable prices, if you look hard enough. You can find the GV08S smart watch on GearBest in four colors: black, white, cofee and silver, and they all look positively fashionable.

But the smart watch is not only about appearances, it’s about features, and the GV08S smart watch excels in that department. Besides being a notification center, fitness tracker and sleep monitoring device, the device is also a camera and a smartphone. Indeed, there’s no need to tether a smartphone to the GV80S smart watch, because it comes with its own single SIM card slot. While other smart watches do offer the possibility of answering calls and dialing calls from the device, they only do so if one or two smartphones are tethered to them, like the Huawei TalkBand B2 (which doubles as a Bluetooth headset), the GV08S can make and take its own calls, with its own phone number, which is neat enough for the price.

The device comes with a 1.5 inch IPS OGS touch screen with a 240*240 resolution, which is a rather standard display, with enough protection to not become scratched after a single wear. A 500 mAh battery is responsible for keeping the smart watch alive for two or three days, and it charges through microUSB. The VGA camera that’s on the upper side is a handy feature, and while it won’t take stunning photos (not even close) it’s great for a spy camera that drivers will love most, in my opinion. The smart watch is also equipped with HD voice recording which works in long distances too, although not longer than a couple of meters, to be fair.

Making use of the Bluetooth 3.0 receiver in the smart watch involves listening to music from your smartphone, but you can always insert your own microSD card into the device and listen straight from there, which can be a great feature to use when on holidays and various commutes and trips. The only thing the smart watch is missing, is a data connection. For internet, you’re going to have to be connected to a smartphone via Bluetooth. But that still makes the GV08S smart watch a neat and feature-filled device that any Android smartphone user can make use of.

I’m Load The Game’s co-founder and community manager, and whenever I’m not answering questions on social media platforms, I spend my time digging up the latest news and rumors and writing them up. That’s not to say I’m all work and no fun, not at all. If my spare time allows it, I like to engage in some good old fashioned online carnage. If it’s an MMO with swords and lots of PvP, I’m most likely in it. Oh, and if you’re looking to pick a fight in Tekken or Mortal Kombat, I’ll be more than happy to assist! Connect with me by email markjudge (@) loadthegame.com only
@@MarkJudgeLTG
Previous Destiny and Red Bull partner up to bring you a new quest
Next Xbox One Backwards Compatibility: How it will work