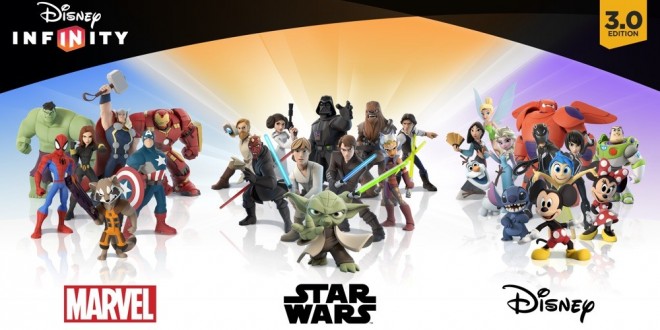 Disney Infinity veterans and newbies alike may need to make a little extra space in their physical and digital toy box! Disney Interactive has announced that the Disney Infinity 3.0 collection will be available on August 30th.

The force is strong with this edition, featuring a whole new slew of your favourite Star Wars characters. Originally announced in early May, 3.0 will mostly feature characters from the Clone Wars and Episodes 1 through 3. For those who aren’t of the younger generation and prefer their galactic wars to be of the “classic” variety, the Disney Infinity 3.0 launch trailer looks like a ton of fun and does have quite a few familiar faces (Solo, Chewie, Leia).

Twilight of the Republic

To get Star Wars fans young and old on board, the starter pack “Twilight of the Republic” will contain quite a few great looking figures and components that include both Star Wars, Inside Out and classic Disney characters:

While I’ve never been into the whole “toys to life” approach to games, the list of figures and just the straight fact that it is Star Wars, peaks my interest! Disney Infinity 3.0 comes with a few other nifty upgrades, including ones to the digital Toy Box that will now feature a homeworld type of hub that will include an online matchmaking system.

In addition to that, pre-ordering will give players early access to “Toy Box Takeover“. Takeover allows figures and players to use characters from across the Infinity universes in each other’s worlds (Star Wars meets Marvel anyone?).