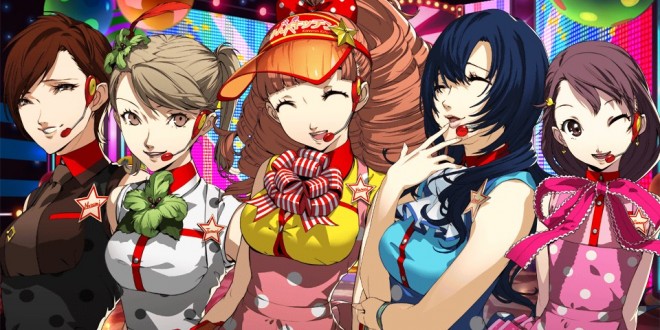 Persona 4: Dancing All Night Review – Step On Up

The Shin Megami Tensei: Persona series has a high standard to uphold. The core games of the series have all been incredibly solid RPGs, and even the fighting spin-off games have been fantastic. Needless to say, expectations for Persona 4: Dancing All Night are pretty high. Don’t worry, though – Dancing All Night not only meets those expectations, but smashes them completely and shows that a great series like Persona can break through genres, make huge changes, and still be absolutely fantastic. 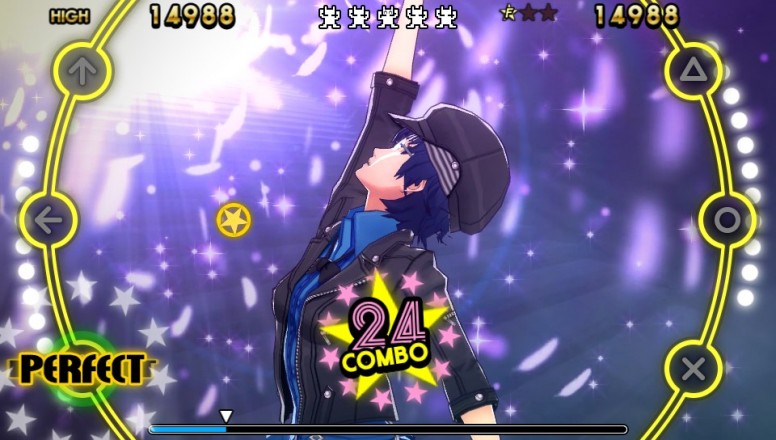 The story of Dancing All Night is more deep than I expected. At first, things seem pretty silly – Rise Kujikawa has decided to return to the stage, and the investigation team from Inaba is asked to perform as backup dancers. Weird, right? I mean, Naoto doesn’t really seem like a dancer (even though she is, and it’s amazing). The first few chapters are frustrating, and I quickly began to get annoyed at where I thought the story was going. As things go on, though, compelling themes arise and an impressive amount of character development takes place over a relatively short visual novel styled story mode. ATLUS spared no expense on making the story as theatrically intense as possible – even though a few voice actors have been replaced (most notably Rise), the dialogue in Dancing All Night is fully voiced. This adds a lot to the narrative style of the game, and I think the developers deserve praise for taking the extra time to add in all the voice tracks. This isn’t the same level of story-telling mastery that we saw in Persona 4, but it’s by far the most well thought-out story I’ve ever seen in a rhythm game (a genre that rarely even has plot lines). 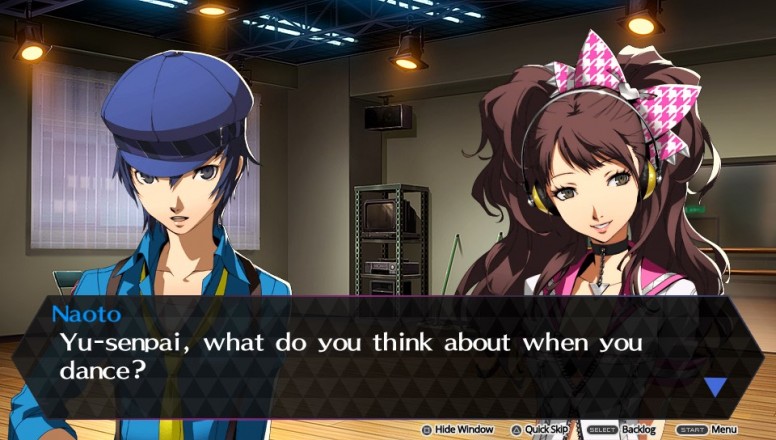 The focus of Dancing All Night is, of course, the dancing – and it absolutely nails it. As someone who’s used to the layout of the Hatsune Miku: Project DIVA games, it took me a while to get used to the interface during the dance numbers. Once I did, I was instantly hooked. You’ll use the up, left, and down directional buttons along with the triangle, circle, and x buttons to hit notes and pull off combos. There’s also a prompt that asks you to flick either control stick in any direction you want, which helps your score and can fill up your fever meter. Interestingly, these prompts aren’t necessary and won’t detract from your combo if you miss them (or just ignore them altogether). Once you’ve filled up your fever meter, you’ll break into dance fever mode and a partner will join you on stage. You’ll earn more points, get audience approval quicker, and have an easier time recovering from mistakes during this short period. Audience approval, by the way, is basically how you can tell if you’re doing well during a song. If the little shadows on the top of the screen are white, you’re doing a quite average job. If they get green or rainbow colored, you’re bringing the house down and you should feel awesome. If they’re orange or red, you’re not far away from a game over. It’s a cute system, but it’s also kind of hard to follow. I’ve spent dozens of hours with the game and I still haven’t figured out exactly how many mistakes or combo breaks it takes to bring your audience approval meter down. You can see your high score in the top left corner and a combo counter on the screen, but I do wish there was an easier way to keep track of why I’m losing or gaining the approval of the dancing monsters that I’m performing for. That being said, the dancing system is really excellent here, and I was pleasantly surprised by the tight controls. There are also ways you can make things harder for more money and a higher score, or make things easier for a deduction in money and a lower score. This makes it easier to move between difficulty levels, which can be very helpful when tackling the games hardest songs. 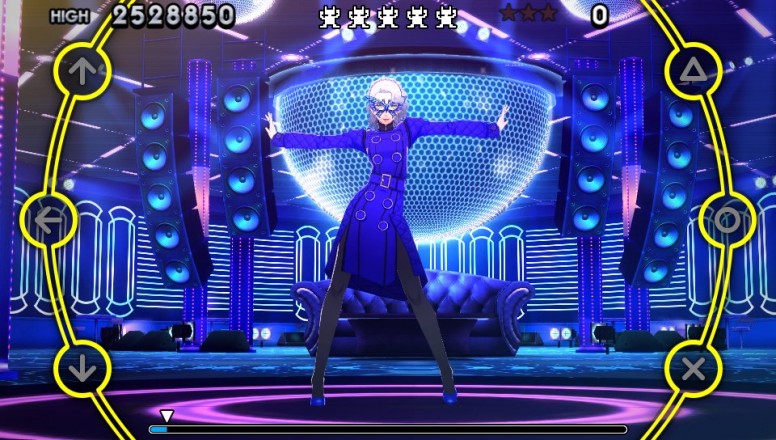 The music of Persona 4 is the reason why Dancing All Night exists. Shoji Meguro crafted a masterpiece when he composed the soundtrack for Persona 4, and this game allows those incredible tracks to be the center of attention. I have quite a few games that allow you to spend time just listening to the songs featured in the game, but Dancing All Night is the only game that has made me actually want to use the feature. Songs like Reach Out to the Truth, Your Affection, Pursuing My True Self, and Time to Make History are fan favorites that really capture the spirit of the Persona series. There’s even a remix of the Junes theme song, which is just awesome – plus, it’s performed by Nanako, which is pretty much the cutest thing ever. Shadow World and Maze of Life are also definite highlights. My personal favorite is Electronica In Velvet Room, which is a remix of The Poem for Everyone’s Souls (a staple in the Persona series), but all the tracks are really awesome. There are some strange remixes (most notably the ridiculously difficult remix of Heaven), but they all have their own charm and I wouldn’t have taken any of the songs away from the game. There are also some cool tracks and characters that will be available as DLC, so there’s a lot of potential for the game to get even better. Visually, Dancing All Night looks fantastic. The dance routines are surprisingly well thought-out, and the choreography is a lot of fun to watch. Again, I had never gone back to watch the background footage of a rhythm game until I played Dancing All Night. Dressing your favorite Persona characters up in cool costumes and watching them dance to your favorite songs is a tremendous amount of fun, and even after countless hours playing, I still haven’t gotten tired of the bright art style. Dancing All Night is a great game. As a visual novel, it’s excellent. As a rhythm game, it’s phenomenal. However, it’s really aimed at those already familiar with the Persona franchise. If you’re not a Persona fan, you probably won’t get as much out of this game as I did. That doesn’t mean you shouldn’t give it a shot though – I used to think that Hatsune Miku: Project DIVA F 2nd was the best rhythm game on PS Vita, but Dancing All Night has me rethinking that opinion. If you like good music, rhythm games, fun art styles, and visual novels, Dancing All Night is for you. It’s almost impossible to play this game without a smile on your face, and that just might be the greatest thing about it – Persona 4: Dancing All Night will taking up a lot of my time for the next few months, and I couldn’t be happier about it.

Dancing All Night is a rhythm game / visual novel hybrid with addictive gameplay, incredible music, and an interesting storyline. Vita owners would do well to check this one out.

I'm Aria! When I'm not doing other things, I'm either playing video games or writing about them. If you like games, anime, and random stuff, you can follow me on Twitter @Sage0fForest
@@Sage0fForest
Previous Super Mario Maker Review
Next Animal Crossing: Happy Home Designer Review