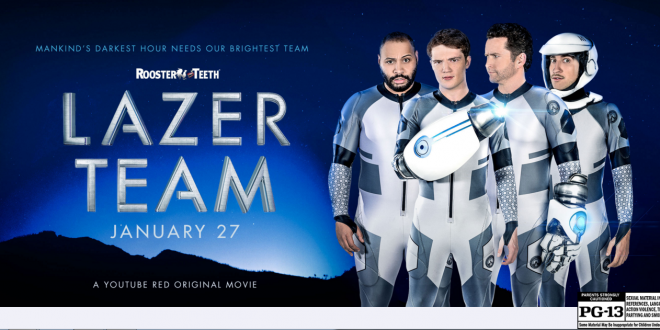 (To read a review of Lazer Team, click here.)

Rooster Teeth’s first full length movie, Lazer Team, was already breaking all kinds of records before it came out by raising almost $2.5 million in crowdfunding. Less than 24 hours after it reached theaters, Lazer Team broke even more records by reaching over $1 million in pre-sale tickets. According to a press release, Lazer Team sold more than 100,000 tickets through Tugg, an international cinema on-demand distribution platform.

While early ticket sales numbers are impressive so far, it should be noted that not everyone who wants to see it can see it yet. For most people, a movie that comes out on Wednesday would have to wait until the weekend, and in many cases, their local theater simply isn’t showing the movie. However, it would not be a surprise if digital and physical sales of the movie catch up to and surpass ticket sales in the near future, especially once Lazer Team comes out on YouTube Red in early February.

In any case, this may very well be the start of a new generation of crowdfunded movies, just like how crowdfunded games have become more and more common. However, it is unlikely that other crowdfunded movie attempts will be as successful as Lazer Team any time soon, seeing as how Rooster Teeth currently has one of the largest established audiences in the history of web based content with almost 2 million registered community members on their official website alone. By comparison, the previous record holder for pre-release ticket sales was Touch the Wall, a documentary about the Olympic swimmer Missy Franklin, which sold just over 47,000 tickets over a period of 7 months.

Matt Hullum, the CEO of Rooster Teeth and the Director of Lazer Team, stated that “In making Lazer Team it was always important to us that our fans all around the world would be able to see it as one big community and we are thankful our partnership with Tugg has given them the opportunity to view the film together on the big screen.”

@https://twitter.com/thefallenlords
Previous Lazer Team review: A better superhero movie than The Avengers?
Next The Division beta impressions: It’s like Destiny, but with matchmaking!