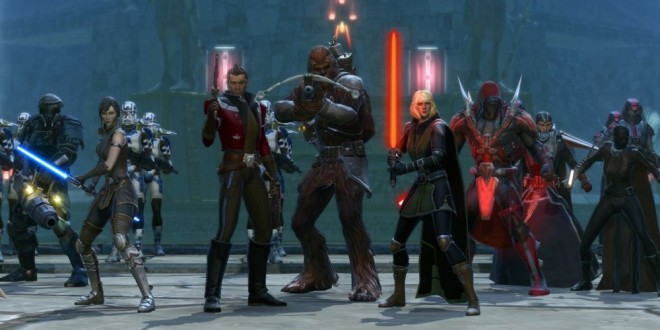 The Old Republic and the Star Wars EU

As anyone who loves Star Wars will know, Lucasfilm is now under the control of the titanic mouse-eared corporation, Disney. And prior to the release of The Force Awakens, Disney made a controversial decision: all the content outside the movies and the television shows was declared non-canon. Hundreds of books, comics and games that made up the Star Wars Expanded Universe were thrown out like trash, re-branded as Star Wars: Legends, and treated like glorified fanfiction.

With Disney’s decision, stories from the beloved Knights of the Old Republic era were also thrown into the Legends bin. Every story told was treated as non-canon like all the rest. But the developers at Bioware were in the process of creating new content for their Star Wars MMO, The Old Republic when the decision was made. Everything they release is still technically non-canon, but thankfully it’s still coming.

This puts The Old Republic in a very interesting position. Everything in the old EU is over, and the ongoing books, comics, and games will never be continued. Despite this, The Old Republic trudges on. As a result, it now holds a unique place as the last remaining example of the old Star Wars EU.

The funny thing is that the developers seem to know this, and seek to include as much EU content in the game as they can manage. Classic planets like Tython, Korriban, and Manaan – nonexistent and forgotten in the new canon – continue to hold sway in the storylines. Other references are more subtle, such as the use of the Republic Commando theme in Knights of the Fallen Empire, or the presence of Darth Bane’s impenetrable Orbalisk armor as wearable gear.

The Old Republic now stands as the only Star Wars project that can successfully use these old elements. We’ll probably never see fan-favorite characters like Kyle Katarn again, but as long as The Old Republic continues we’ll be gifted with happy reminders of the Star Wars that was.

Bioware was done a great disservice when Disney threw out all the old content. Stories that they lovingly crafted, and continue to craft, were dropped like a sack of hot bantha poodoo. It’s true that Disney has never specifically said that the old EU is gone forever. But until that unlikely day that some of it is re-canonized, The Old Republic is the last example of the galaxy far, far away that many people (myself included) grew up with.

I wasn’t enamored with the new movie like seemingly everyone else in the world. It was fun, but far from fulfilling. And for those who also grew up with stories like Jedi Knight, X-Wing vs. TIE Fighter, and Knights of the Old Republic, Bioware’s MMO is the last place to bask in the nostalgia of the Star Wars galaxy as we remember it. No First Order. No Kylo Ren.

Just Star Wars. The way it used to be.

I’m Load The Game’s co-founder and community manager, and whenever I’m not answering questions on social media platforms, I spend my time digging up the latest news and rumors and writing them up. That’s not to say I’m all work and no fun, not at all. If my spare time allows it, I like to engage in some good old fashioned online carnage. If it’s an MMO with swords and lots of PvP, I’m most likely in it. Oh, and if you’re looking to pick a fight in Tekken or Mortal Kombat, I’ll be more than happy to assist! Connect with me by email markjudge (@) loadthegame.com only
@@MarkJudgeLTG
Previous The Pixel and Pixel XL Could Come Without An Audio Jack
Next The Moto M Gold and Silver was Revealed in Leaked Photos