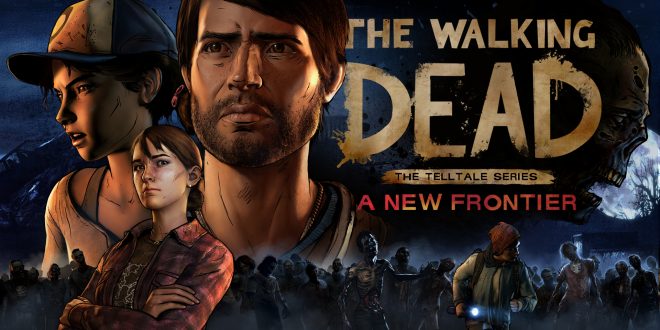 Telltale Games is well-known for their story-rich game entries which emphasize the importance of player choice. Fans of the developer should get excited, as The Walking Dead: The Telltale Series – A New Frontier premieres today with the first two episodes: Ties that Bind Part I, and Ties that Bind Part II.  A New Frontier is slated to be a five part series and these first two parts are available for download today online through the Telltale online store, Steam, and other digital distribution services. The Walking Dead: The Telltale Series – A New Frontier is also available for purchase through the PlayStation Network for PS4 and Xbox Games Store for Xbox One. The episodic release will also be available this week for iOS devices through the App store as well as Android devices through Google Play. In a press statement this morning, Kevin Bruner, CEO and Co-Founder of Telltale Games, had the following to say about this new release:

“We’re starting this dramatic new entry point to the series in a way that will surprise and intrigue existing players and newcomers alike, and there is no better way to do that than with an epic two-part premiere. We hope that all fans of The Walking Dead can enjoy this introduction to new player character Javier and his family, and that those already familiar with Clementine will be as excited as we are to see her mysterious return.”

Those wanting to purchase The Walking Dead: The Telltale Series – A New Frontier episodes as a whole rather than a la carte will have that option in February, when a “Season Pass Disc” releases for Xbox One and PlayStation 4  “which will include the premiere episodes for the third season, as well as access to all subsequent episodes in the five episode season for download as they become available.”

The Walking Dead: The Telltale Series has sold more than 50 million episodes and has earned over 100 Game of the Year awards from various media outlets.  The game is based on Robert Kirkman’s critically acclaimed comic book series, and offers an “emotionally-charged, tailored game experience where a player’s actions and choices affect how their story plays out across the entire series.”

For more information, check out the trailer for the launch below.

My name's Zach and I'm a college student supporting myself with freelance writing as I finish my degree. I largely focus on technology news and reviews for LoadTheGame, though I do report on games from time to time.
@zr566762
Previous You’ll Soon Be Able to Skip Story in Final Fantasy XIV
Next CD Projekt RED Receives Financial Grant From Polish Government; Put Towards New Features for Cyberpunk 2077