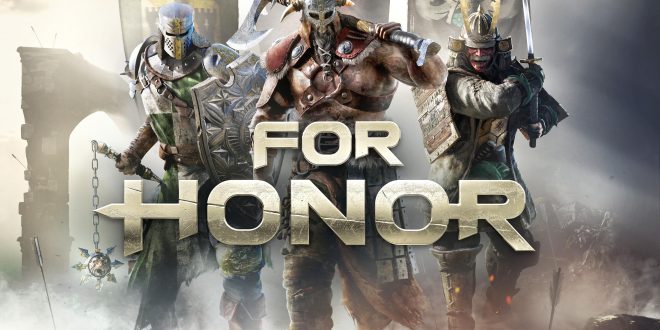 When For Honor was first announced I saw it as a western style Dynasty Warriors and had written it of, the all changed however. The first time I swung my Viking Raiders Axe into the head of a rival samurai in the closed beta, I realised just how innovative For Honor was. I went into the Beta with no interest at all, but over the course of that weekend I played over 30 hours of the game and pre order it as soon as the Beta ended. On paper For Honor is simple enough, the ultimate grudge match. Vikings, Samurai and Knights all fighting it out to see who is the best (Vikings obviously). That being said, its impossible to know just how good the game is without feeling the controls for yourself. The Clang of metal as you parry an attack, the battle cry of your opponent as they advance or the shear joy of pulling of the brutal execution after a hard fought fight. For Honor really is something special.

The story in For Honor is simply a way to introduce the different classes and factions that fight it out in the multi-player modes. Each faction has a 6 mission campaign to play which provides back story to why the factions are fighting each other. Basically they are trying to give reason to the constant fighting in the online modes. The story takes us through how Apollyon (For Honor’s Big Bad) engineered the faction war. While Apollyon herself is a fascinating character, the story never goes into her motives behind starting the faction war. All we know is she wants to see the strongest warriors raise to the top. The fact her motives are not discussed, left me deflated when the story mode had ended.

The character you play as in For Honor are not as interesting as Apollyon in my opinion, but it is still interesting to see the story behind each class and character in the larger game. It also introduce me to some classes I was not interested in playing, such as the Valkyrie which became my favourite class of the 12 available. The story really does serve as a perfect way to introduce you to the different classes and their unique abilities. Unfortunately I did not get to play as every class, for some reason the Knights Conqueror ,the Viking Berserker and both samurai Shugoki and Nobushi were left unplayable in the campaign. 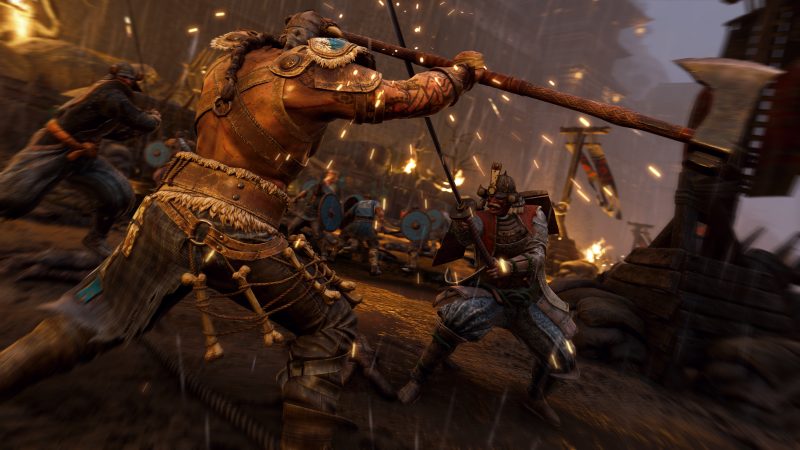 For Honor’s combat system is probably the most innovative I have seen this generation. It starts of simple, three stances for three directions of attack and defence. You change you stance to attack and defend from either the left, right or from over head. Next you add in both light and heavy attacks plus a guard break attack that lets you throw your enemies. Not to mention the brutal executions that can happen if you or your  opponent manages to finish the other of with a heavy attack. It all seems very simple, easy to understand and execute. If that’s all the combat system was it would be elegant, simple and boring.

Fortunately the developers added a ton of extra sub systems to change things up. They took that combat system and added, unblock-able attacks, parries, bleed effect, stun attacks, infinite chain attacks and counters. Each class has their own unique move set. Some classes have the abilities to deflect attacks by dodge but can not stay in each defence stance constantly. Others have chain combos but no unblock-able attacks. Some may have a bleed effect attack that lets you attack and back of as your opponents health slowly fades away. To be successful in For Honor not only do you have to understand your class, but you enemies class as well.

If all that was not a deep enough combat system, Ubisoft Montreal added even more depth to it by included environmental hazards. You can find yourself set on fire, thrown from a cliff or even impaled on a wall of spikes if you do not mind your surrounding. Then there is the instant kill that happens if your opponent drops from above you to kill you light a hawk swooping down on its prey. The combat systems in this game really are the shinning star of For Honor. 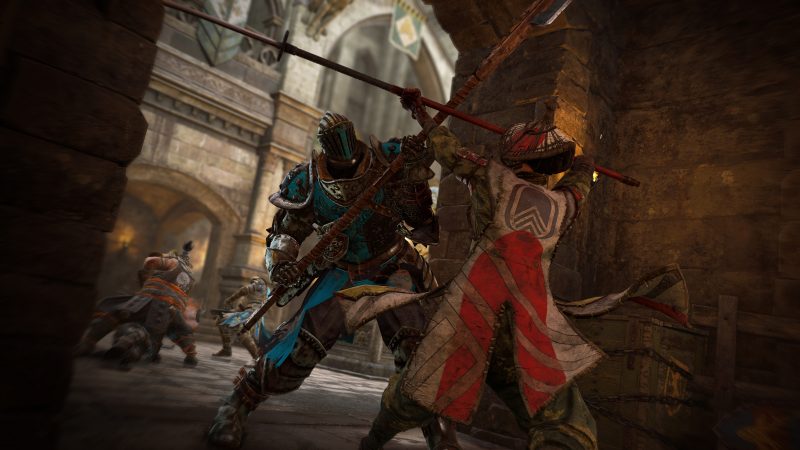 The most engaging content in For Honor comes from its multi-player. 5 different game modes that can be played against other players or the computer A.I. In an all out war to take over territories to win the Faction War. The Faction War is a giant map where the three factions compete for control. After each match you are able to deploy ” War Assets” to help defend or attack different territories. The amount of assets you get to deploy all depends on your personal performance. The better you do the more help you are to your chosen faction. The War takes place in a ten week season. Each season is split into five, two week rounds. During these are turns that last 6 hours, after each turn the map updates to show how your faction faired.

The five multi-player game modes are:

While each mode has their merits, my favourite was Dominion by a mile. The tactics used are always different and no match ever felt the same. The best part about For Honor’s Multi-player is that each and every match felt fresh and new. Not only does everyone have their own classes to play as. Each player sets up the classes to their own unique play-style. You may have faced a team of four wardens, but each of those wardens will fight in totally different style. It is for that reason I often found that I had lost a whole day playing For Honor without even realising.

The graphics in For Honor blessed me with some of the most awe-Inspiring views I have seen in a game. Looking out from a castle over a battlefield full of angry Vikings pillaging, or a Japanese city ablaze. Some of the scenes I got to witness while playing For Honor truly stopped me in my tracks. That being said not all is rosy with For Honor’s graphics. During the course of the game I was greeted with what has to be the worse looking horse design since the first assassins creed game. The horse looked more like it was made from plastic or Lego, which really broke the immersion the rest of the beautiful world had created.

While the graphical design of the game may of flattered at one hurdle. The sound design is second to none. The clash of swords colliding in the air. The “swoosh” of an arrow narrowly missing your head, or the grunts and cries of your enemies as you engage them in combat. All this adds to the immersion and feel of For Honor. Whether its the cry of a Viking Raider using his unblock-able attack, or the sound of the Knights peacekeeper pushing a blade into the side of their foe repeatedly. The sounds seem so refined and often blood curdling. The team behind it should truly feel proud of themselves. 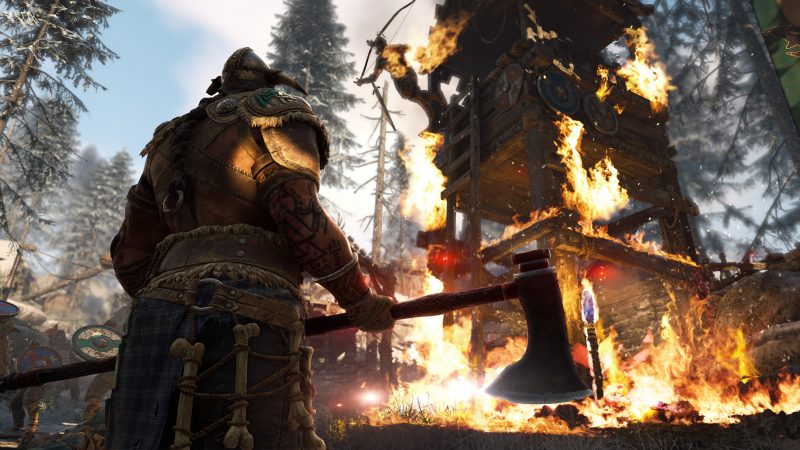 For Honor is a truly innovative fighting game that has some amazing action game-play. The combat systems had more depth to the game than any other game of this generation to date. If the community get behind it, For Honor could become another competitive Monster from Ubisoft just like The Division and Rainbow Six: Siege. The Story is interesting but leaves some questions unanswered and the multi-player is fresh and no match feels the same. For Honor is a game that is easy to learn but nigh impossible to master. If you can only buy one game every 6 months For Honor is the type of game that could keep to occupied for the entire year. I would recommend it to anyone.

You can win your own copy of For Honor by clicking here.

When For Honor was first announced I saw it as a western style Dynasty Warriors and had written it of, the all changed however. The first time I swung my Viking Raiders Axe into the head of a rival samurai in the closed beta, I realised just how innovative For&hellip;
For Honor: Review
For Honor: Review
Robert Scott

Ubisoft Montreal have created the most addictive and innovative fighting game of this generation.

Robert Scott lives Blackpool in the Northwest of England. He has a really passion for gaming, films and keeping up to date on the latest TV shows. He has always loved Playstation since he received his first Psone when he was younger
@poemsfromwithin
Previous Into the Breach Announced
Next The immortal hedgehog ‘Sonic’ is back