Breaking News
Home » OPINION PIECES » Fallout 4’s weapons, loot, and you: stealing everything just because you can 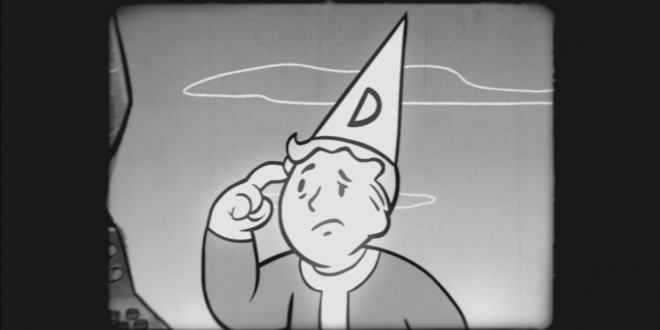 Fallout 4’s weapons, loot, and you: stealing everything just because you can

A cornerstone of any good RPG (or for that matter, any game with certain RPG elements) is the loot that you get. This is true whether it be Borderlands and it’s infinite variations of weapons, Destiny and it’s large array of perks that can fundamentally render a weapon useless, and most recently, Fallout 4. Unlike other games however, Fallout 4 fundamentally changes the way loot is handled in that there is effectively no such thing as useless loot. For example, it is entirely possible that you can kill a boss in Borderlands or Destiny and be rewarded a terrible weapon that you don’t want.

But in Fallout 4, you can pick up a terrible weapon, break it down, and use the parts from that weapon to upgrade something you want to use. Not only that, but literally everything that you pick up in the world is given some purpose. After all, who can forget the countless bottles of Wonderglue that you probably passed by when playing Fallout 3. Now, those bottles of Wonderglue can help you turn that basic sniper rifle you were using into a .50 caliber death machine. Truthfully, Wonderglue and duct tape have become one of the more rare commodities in crafting your own weapon mods, at least if you enjoy experimenting with all the different (and sometimes counterproductive) mods you can stick on your weapons.

Even the random plants you find can be used to help start up new settlements, which in turn provide more materials and outlets for weapons, armor, and more. In fact, it may be more beneficial in the long run to hold on to useless junk or outclassed weapons rather than selling them because of how relatively sparse some of the settlements are. Unfortunately, this does clutter up your inventory very fast, having to sort through all the toasters, moon monkies, and who knows what, but at least it makes it easier to get what you want without having to actively look for that one box of asbestos that might be laying around in the Wasteland.

Such a change to how traditional loot is handled is a rather clever way to extend game time (without making it seem like a grind), along with all the other things that Fallout 4 introduces that requires said loot. After all, you could theoretically find all the best weapons or buy the best armors in the game, but it is significantly easier to just pick everything up as you travel the Commonwealth and invest it into your settlements. In a way, this resource loop is even more satisfying than simply getting a powerful weapon off the bat because you know what you’re getting from it and you are actively creating your own unique weapon every step of the way.

@https://twitter.com/thefallenlords
Previous Get Your Business Done with WritingDone
Next Destiny’s new microtransactions have nothing to do with gambling. At all