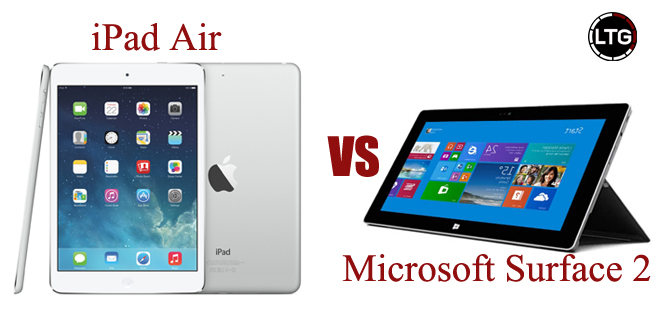 iPad Air vs Microsoft Surface 2- Which is the better tablet?

In today’s match-up, we’ll be pitting a highly popular tablet, the Apple iPad Air, against an underdog that certainly poses a threat, mainly the Microsoft Surface 2. The Surface 2 is the successor to the moderately successful Surface RT, and certainly brings multiple improvements to the table. On the other hand, the iPad Air is a well-established name in the tablet market, and one that won’t easily be cast aside. Which one is the better is what we’re going to find out!

The iPad Air has many things going for it. It sports really strong hardware, which on paper might not seem like much, but in reality, the tablet performs really well and proves to be reliable. The Air also brings a high quality camera to the table, a camera that’s marginally better than many competing tablets’ offerings. With iOS 7.1 and support for a multitude of features, you can’t complain about anything software-wise, although enthusiasts will (as with any Apple product) frown at the lack of flexibility. Still, if you want something stable, easy to use and varied when it comes to software, you can’t go wrong with iOS 7.1.

The iPad Air isn’t exactly cheap, but when you consider build quality and a great battery life, combined with a visually appealing and solid design (that’s also sturdy), you start to forget the drawbacks of the price. All in all, taking the iPad Air into your hands and realizing its potential makes you forget about the hefty price instantaneously. Using the Air is a satisfying experience in all aspects. With a great display (don’t be fooled by the seemingly small PPI, the display is really good and provides a hard-to-match viewing quality) that sports vivid and accurate colors, as well as plentiful storage and solid hardware, the Apple iPad Air is a noteworthy opponent for any tablet.

There’s no doubt the Microsoft Surface 2 is a huge improvement over its predecessors. If you don’t mind using Windows 8.1 RT, then you’ll love the operating system provided by Microsoft. The Surface 2 also brings a solid quad-core CPU, 2 GB of RAM and microSD support for the more storage-needy among you. Sound quality unfortunately isn’t great, and neither is the display. It looks good on paper, but the low PPI rate and inaccurate color accuracy leave something to be desired. It’s also not as fast as the hardware would suggest, and despite having good stats on paper, the Surface 2 sometimes seems sluggish and unresponsive.

The Microsoft Surface 2 isn’t all bad though. While the design is nothing to be awed about, the tablet has a really good camera that provides quality photography. The Microsoft Surface 2 also has value going for it, sporting a fair and accessible price. Add to that features like split-screen (which is great for multitasking) and design elements such as the great kickstand position provided, and you have yourself a solid tablet that’s sure to draw in customers.

While being a huge improvement over the Surface RT and being a solid tablet in its own right, the Microsoft Surface 2 simply can’t compete with the Apple iPad Air. Yes, the Surface 2 brings value to the table, but is it enough when it looses significantly on most other aspects? The iPad Air has a much better display with better color accuracy and general viewing quality. The iPad air also has better hardware performance overall and is better designed, while having a stronger battery life (the difference is significant). In terms of software, it comes down to preference. The Microsoft Surface 2 has Windows 8.1 on its side, and if you prefer the OS, obviously you’ll prefer the Surface 2 with it. Still, the iPad Air brings a multitude of features and apps that are pretty-much foolproof, and overall, it’s simply easier to use Apple’s tablet.

This one isn’t a tie unfortunately for Microsoft, as the iPad Air is the overall better tablet when compared to the Microsoft Surface 2.

I’m Load The Game’s co-founder and community manager, and whenever I’m not answering questions on social media platforms, I spend my time digging up the latest news and rumors and writing them up. That’s not to say I’m all work and no fun, not at all. If my spare time allows it, I like to engage in some good old fashioned online carnage. If it’s an MMO with swords and lots of PvP, I’m most likely in it. Oh, and if you’re looking to pick a fight in Tekken or Mortal Kombat, I’ll be more than happy to assist! Connect with me by email markjudge (@) loadthegame.com only
@@MarkJudgeLTG
Previous Game of Thrones game won’t be a prequel
Next Fat guy Francis destroys Xbox