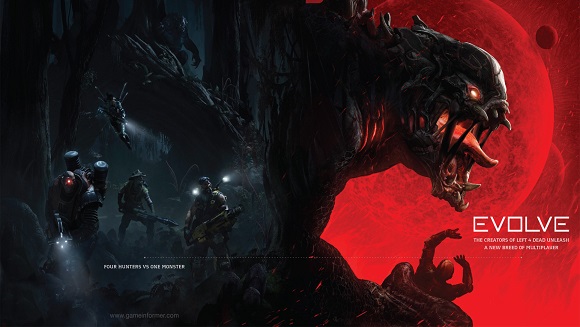 Evolve is an upcoming co-op first-person shooter developed by Turtle Rock Studios, the game was announced back in December 2012 and has 2K Games as its publisher. Turtle Rock is best known for their contribution to the Left 4 Dead franchise which might explain why they were asked to work on this project. The first major details were given back in February, and together with the information that was revealed on the initial day of Pax East we now have a pretty good idea about what the game entails.

Evolve’s gameplay revolves around a team of four players that must work together to bring down a giant monster. It sounds similar to L4D and maybe even Titanfall up to this point, but there is a catch. The monster will be controlled by a fifth player, so the game is basically a 4v1 PvP. It seems unfair at first to go up against four hunters all by yourself, but as the monster you get to evolve by consuming other creatures and will keep getting stronger throughout the game so that evens things out.

The hunters themselves come in a few different varieties. The Trapper class for example will be able to detect and restrain the creature while the Support class can use buffs and shields to aid his teammates in combat. The Assault class is expected to do most of the heavy shooting and there is also a Medic class which can provide health boosts and healing to the team. The monster will have different classes to choose from as well but for now we only know about one of them, The Goliath.

An official release date for the game hasn’t been announced yet but it’s expected that it will be coming out this fall for PC, PS4 and Xbox One. For more information about Evolve you can visit the game’s official website at evolvegame.com

I’m Load The Game’s co-founder and community manager, and whenever I’m not answering questions on social media platforms, I spend my time digging up the latest news and rumors and writing them up. That’s not to say I’m all work and no fun, not at all. If my spare time allows it, I like to engage in some good old fashioned online carnage. If it’s an MMO with swords and lots of PvP, I’m most likely in it. Oh, and if you’re looking to pick a fight in Tekken or Mortal Kombat, I’ll be more than happy to assist! Connect with me by email markjudge (@) loadthegame.com only
@@MarkJudgeLTG
Previous Blizzard introduces four new characters to Heroes of the Storm
Next Amazon will compete with Apple and Samsung for the smartphone market

Mods have added a new perspective to games for a long time. Ever since they ...