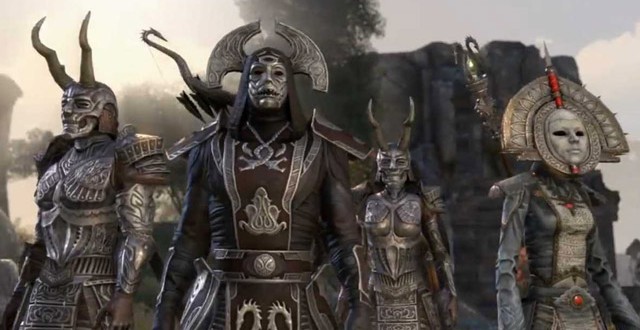 The highly anticipated MMORPG Elder Scrolls Online was launched earlier this month. The game was generally well received, although some long time veterans of the series claim it does feel a bit like “a watered-down version of Skyrim”. In any case, Bethesda aims to introduce a lot of updates in the near future, with the first batch of free content coming to ESO later this month.

There have been a lot of questions on the forums in regards to the new content and Bethesda did their best to answer them. So let’s take a look at some of the things we know about Craglorn, the first Adventure Zone being introduced to The Elder Scrolls Online.

The zone is situated between Hammerfell and Cyrodiil, and is designed for parties of 4 players but it also includes Trials for 12 player groups. We learn from the trailer that the constellations have mysteriously disappeared from the sky. It’s up to the players now to discover what happened to the Celestials and why it’s affecting Craglorn.

“The Celestials are a new concept based on the existing lore of the constellations in The Elder Scrolls games.” Bethesda clarified. They come in the form of The Warrior, The Mage, The Thief and The Serpent.

Storyline content for Veterans will be available once Craglorn launches. Four player group quests and exploration sound like a lot of fun for all the people out there longing for something new. However, 12 player Trails and the Leaderboards are what I find to be more interesting about the new Adventure Zone. In a recent post on their website Bethesda shed some light about the upcoming Trails:

“Do you only get rewards if you’re at the very top of the leaderboard? – Darian Clete Eutsler “

“No. There are rewards you’re eligible for on a weekly basis regardless of whether your group makes the leaderboards, and there are also normal loot drops in Trials and other unique gear you can obtain in Craglorn. Think of the leaderboard rewards as a little something extra for doing well. Everyone else will still be able to obtain the gear they want throughout Craglorn and the Trials.”

“So, there is a timer in Trials, but we don’t have to beat the timer, do we? I am guessing some people are not the rush types. – Deborah Moderate”

“You’ll only need to worry about your time in Trials if you’re trying to make it onto the leaderboards. Trials can be completed at your group’s pace, and if you can defeat all the challenges in a Trial, you’ll be rewarded no matter how long it took. “

This all sounds very exciting as it brings some much needed diversity to The Elder Scrolls Online. I’m hoping we’ll get to see more content of this type further along the road. If you’re interested in some of the other questions that Bethesda answered in their “ask us anything” session regarding the upcoming Adventure Zone you can read more about it in the original post on elderscrollsonline.com

I’m Load The Game’s co-founder and community manager, and whenever I’m not answering questions on social media platforms, I spend my time digging up the latest news and rumors and writing them up. That’s not to say I’m all work and no fun, not at all. If my spare time allows it, I like to engage in some good old fashioned online carnage. If it’s an MMO with swords and lots of PvP, I’m most likely in it. Oh, and if you’re looking to pick a fight in Tekken or Mortal Kombat, I’ll be more than happy to assist! Connect with me by email markjudge (@) loadthegame.com only
@@MarkJudgeLTG
Previous Eve Online developer CCP shuts down its MMORPG World of Darkness
Next Mass Effect 4 latest news and rumors