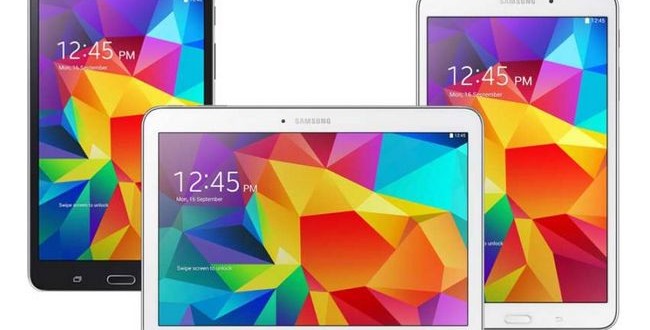 The Korean company has revealed that starting with May 1st, three brand new Galaxy tablets will hit the market. The Galaxy Tab 4 trio will come in 7, 8, and 10.1-inch versions and will be priced at around $200-$350, depending on the variant. Although the Tab series is mostly considered to be low-end one can’t really complain much, they pack a decent enough bang for the buck. Samsung already has a wide variety of high-end devices to choose from, so the addition of something affordable will surely be appreciated by customers. Let’s take a peek at each tablet and let’s see what they have to offer.

The 7-inch version might end up being the most sough after out of the three just because of its size, smaller tablets seem to have become more popular lately. The device features a 1280 x 800 HD display, runs on a quad-core processor @ 1.2 GHz  and packs a 3 Mpx front camera along with 1.3 MPx rear one. It also comes equipped with 1.5 GB RAM memory, 4,000 mAh battery, 8/16 GB storage options with two microSD slots for user-expended storage of up to 32GB 3G/Wi-Fi or 64GB LTE.

The 8-inch tablet also features most of the specs found on its counterparts. We’re looking at a 1280 x 800 HD display, 1.2 GHz quad-core processor, 1.5 GB RAM, 3 megapixel front camera and 1.3 megapixel rear cam. The device comes with 16 GB storage memory and a microSD card that can go up to 64GB additional storage. The 8-inch version also has a larger 4,450 mAh battery.

The largest of the three also comes with similar specifications, the main difference here is the screen size of course. The Galaxy Tab 4 10.1-inch features the same 1280 x 800 HD display, quad-core processor @ 1.2 GHz, 1.5 GB RAM, 3 Mpx front and 1.3 Mpx rear cameras. Storage is the same as with the 8-inch, 16 GB internal memory with a microSD slot for user-expanded storage of up to 64 GB. As you can imagine, the largest device also comes with the largest battery, 6,800 mAh to be precise.

All three Galaxy Tab 4 devices are already available for pre-order from Samsung and will hit the shelves starting on May 1st. The tablets will come in black or white and run on the Android 4.4 KitKat operating system. Pricing will be done according to their size as it is expected, with the smallest 7-inch being the cheapest at $200. The 8-inch middle brother comes in at around $270, while the Samsung Galaxy Tab 4: 10.1-inch version will cost $350.

I’m Load The Game’s co-founder and community manager, and whenever I’m not answering questions on social media platforms, I spend my time digging up the latest news and rumors and writing them up. That’s not to say I’m all work and no fun, not at all. If my spare time allows it, I like to engage in some good old fashioned online carnage. If it’s an MMO with swords and lots of PvP, I’m most likely in it. Oh, and if you’re looking to pick a fight in Tekken or Mortal Kombat, I’ll be more than happy to assist! Connect with me by email markjudge (@) loadthegame.com only
@@MarkJudgeLTG
Previous Dark Souls 2 PC available on Steam soon
Next Mass Effect 4 rumored to be coming out next spring