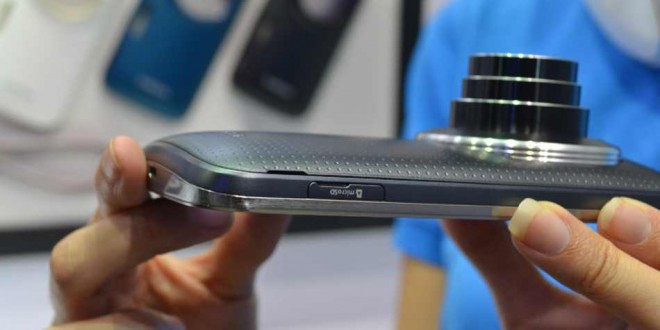 “With the introduction of the Galaxy K zoom, Samsung continues to demonstrate our commitment to creating products that meet the diverse demands of our consumers,” said Sun Hong Lim, Senior Vice President of Mobile Communications Business at Samsung Electronics. Samsung see this latest device as more of a rival to the Nokia Lumia 1020 than the S4 Zoom, the company is keen to stress that it is a standalone product. And most likely the first in a new off-shoot line-up.

The result is a handset that’s no long a little too chunky, but instead is slim, but still offers a 10x optical zoom lens, is on 20.2mm thick, so it’s much more like a phone than previously. On the front is a 4.8-inch AMOLED display with 1280 x 720 pixel resolution. There’s a Exynos chipset combining 1.3 GHz quad-core and 1.7 GHz dual-core processors, with many specifications that are even above and beyond other smartphones in that category, for example it’s a 4G handset with Samsung’s own Hexa-core Exynos processor (1.3GHz quad-core and 1.7GHz dual-core),there is 2GB of RAM on board, NFC, dual-band Wi-Fi, and Android 4.4 KitKat supported by Samsung’s own latest TouchWiz user interface. On-board storage tops out at 8GB, but the SD card slot is capable of expanding that by up to a further 64GB.

While it houses a 10x optical zoom lens it retains a slim enough body to still keep within respectable smartphone territory. It’s only 20.2mm at its thickest point (16.6mm at the edges). The 10x optical zoom lens – 24-240mm, F/3.1-6.3 – is accompanied by a 20.7-megapixel BSI CMOS sensor. It has optical image stablisation on board and a dedicated image processor. Next to the lens there is a xenon flash and an LED autofocus assist light.On the auto settings, not only do you get an autofocus box, which focuses on the point where you tap the screen, but an auto exposure. After setting the focal point, you can then set which part of the scene you want to take the exposure reading from.

This is designed to help prevent photos being under or over exposed in certain areas.The Galaxy K Zoom also features object tracking – which keeps a subject in focus, even when in motion – and smile and blink detection for portraits.It’s a bit like Lightroom presets. Press the volume and shutter buttons from the lock screen and the camera will be ready to take a picture within 0.3 seconds.Galaxy K zoom offers all the features that consumers want in a flagship Galaxy smartphone, such as Ultra Power Saving Mode for minimizing the battery consumption, S Health Lite for personalized fitness and lifestyle coaching, and a Studio app to allow users to easily edit their pictures and videos and it will come in three colors: charcoal black, shimmery white and electric blue.

Price is yet to be confirmed. It is rumored that Samsung Galaxy K Zoom will be available in stores at the end of the month.

I’m Load The Game’s co-founder and community manager, and whenever I’m not answering questions on social media platforms, I spend my time digging up the latest news and rumors and writing them up. That’s not to say I’m all work and no fun, not at all. If my spare time allows it, I like to engage in some good old fashioned online carnage. If it’s an MMO with swords and lots of PvP, I’m most likely in it. Oh, and if you’re looking to pick a fight in Tekken or Mortal Kombat, I’ll be more than happy to assist! Connect with me by email markjudge (@) loadthegame.com only
@@MarkJudgeLTG
Previous Nexus 5 vs HTC One M8 – Price vs Power
Next Apple to purchase Beats Electronics