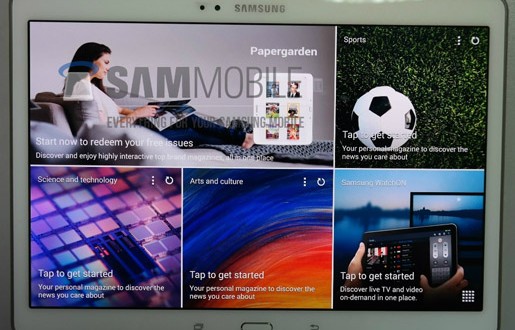 Samsung fans had all the reasons to be excited considering the latest rumors about the future Tab S line. The company has been working on its Galaxy Tab S line for a couple of weeks now, but there weren’t many details known regarding the 8.4-inch and the 10.5-inch Galaxy siblings. Now, due to some leaked images, we were able to make a “mini” review on the 10.5-inch Samsung Galaxy Tab S.

The leaked images of the 10.5 Tab S show an OLED display, the first time Samsung used this type of display since 2011 ( the Galaxy Tab 7.7 featured an OLEN display). Regarding its appearance, the 10.5-inch Tab S is rather similar to the Galaxy NotePRO, featuring a centered home button, a multitasking button on the left and a back button on the right. A report on Sammobile said that both Tab S devices will have WQXGS (2560X1600) resolution displays, being the first tablets ever with a display resolution such as this, plus, the fingerprint sensor, that is also a novelty for the tech giant’s devices.

The bezels on the other hand, are thinner than the NotePRO’s and even if it doesn’t look very different, the home button comes with a fingerprint sensor. It seems like the back of the Galaxy Tab S 10.5 doesn’t have the same leathery texture as the NotePRO, it’s actually more similar to the Galaxy S5’s “perforated” pattern.  It’s rumored the 10.5-inch Galaxy Tab S will feature a 2.1-megapixels camera on the front, next to the Samsung branding, and a 8-megapixels rear camera with LED flash and 1080p full-HD video recording in the center, above the Samsung branding, on the back.

It’s said both Galaxy Tab S devices will run on the octa-core Exynos 5 (5420), SoC (quad-core 1.9GHz Cortex-A15 and quad-core 1.3GHz Cortex-A7) with a hexa-core ARM Mali-T628 GPU clocked at 533MHz. Also, a 3GB of 32-bit dual-channel 933MHz LPDDR3e RAM. There is no information on the storage capacity of the 10.5-inch Tab S, but besides the usual 16GB, 32GB and 64GB options, a MicroSD support is expected. In what concerns the OS, Samsung is being quite mysterious. The Tab S slates might feature the latest version of Android 4.4 Kitkat, perhaps even the Android 4.5 if it’s launched before the Tab S line.

Unfortunately the mystery deepens because Samsung hasn’t made anything official yet. So the big announcement will probably be made this Summer, but nothing is certain. What is certain though is the fact that Samsung’s next tablets, especially the 10.5 Galaxy Tab S might be an impetuous rival to the 2014 iPad models.

I’m Load The Game’s co-founder and community manager, and whenever I’m not answering questions on social media platforms, I spend my time digging up the latest news and rumors and writing them up. That’s not to say I’m all work and no fun, not at all. If my spare time allows it, I like to engage in some good old fashioned online carnage. If it’s an MMO with swords and lots of PvP, I’m most likely in it. Oh, and if you’re looking to pick a fight in Tekken or Mortal Kombat, I’ll be more than happy to assist! Connect with me by email markjudge (@) loadthegame.com only
@@MarkJudgeLTG
Previous Halo’s multiplayer on PC will live on
Next Rumor – Pricing for Hearthstone’s first expansion leaked