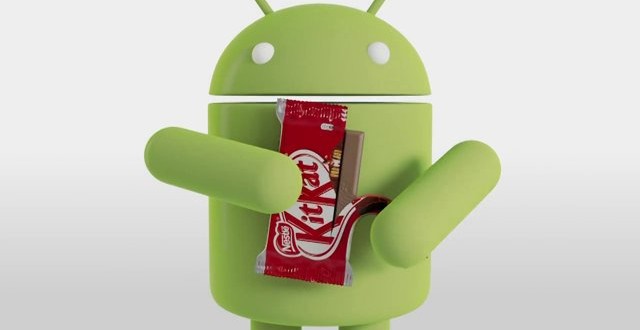 Android 4.4.3 KitKat is being tested on Samsung Galaxy S5 and S4

We realize that rumors and leaks surrounding Android 4.4.3 KitKat are plentiful, but there is some pretty solid evidence for this particular one. The source managed to acquire a couple of documents which shows the status for the aforementioned Samsung devices as “integrating”. The status report mentions update KTU70, which is the build number for Android 4.4.3 KitKat. However, the article says that the update will likely take another month or so until it will be available. 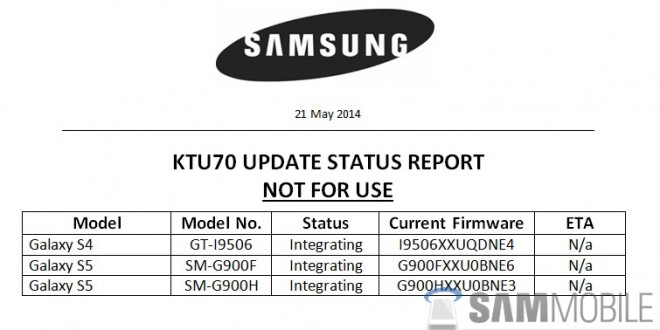 The other status report that was leaked by the website reveals the Android 4.4.2 KitKat update timeline for some of Samsung’s other devices. According to this document, the update will start rolling out for the Galaxy S4 mini, Galaxy Grand 2, Galaxy Mega 5.8, and Galaxy Mega 6.3 sometime in June. The report also suggests that the Galaxy Note 3 Neo will be the next device to get the update later this month. 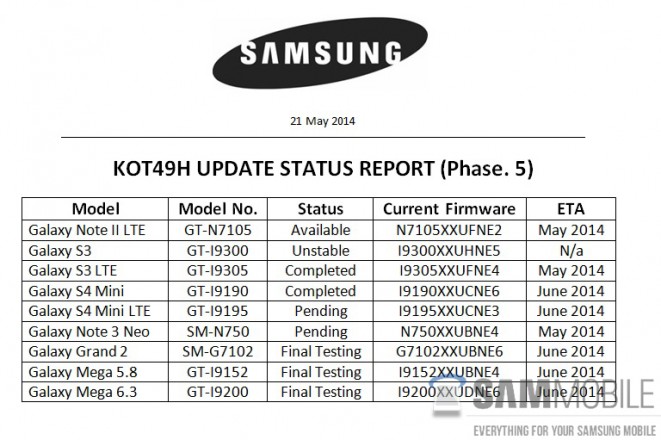 Once it rolls out, Android 4.4.3 KitKat is said to come with fixes for more than three dozen bugs, including unstable data connections, random reboots, and many more. The update is expected to arrive for a wide range of other devices as well, most notably Google’s Nexus 4, Nexus 5, Nexus 7 and Nexus 10. Most rumors claim that 4.4.3 should come until the end of the month, meaning that we should see it very soon. A previous report mentioned May 23th, but that day has passed and the update is still nowhere to be seen.

A lot of people are eagerly anticipating version 4.4.3 and are demanding to see it soon rather than later for Nexus devices. There is even an online petition to Google which has gathered more than 32.000 signatures until now. “We, the Galaxy Nexus owners and anticipators ask you, Google, to update the Galaxy Nexus for one last time and give us Kitkat!” The author of this petition says that he hasn’t received an answer from the internet giant yet.

Petitions aside, Android 4.4.3 KitKat will most likely be released very soon for Nexus devices, probably sometime around Google’s I/O developers conference. In the meantime, it’s good to have the Samsung status reports as confirmation that the update is slowly, but surely coming after all. Stay tuned for more news.

I’m Load The Game’s co-founder and community manager, and whenever I’m not answering questions on social media platforms, I spend my time digging up the latest news and rumors and writing them up. That’s not to say I’m all work and no fun, not at all. If my spare time allows it, I like to engage in some good old fashioned online carnage. If it’s an MMO with swords and lots of PvP, I’m most likely in it. Oh, and if you’re looking to pick a fight in Tekken or Mortal Kombat, I’ll be more than happy to assist! Connect with me by email markjudge (@) loadthegame.com only
@@MarkJudgeLTG
Previous Samsung and LG may use sapphire glass displays
Next H1Z1 new details and screenshots revealed