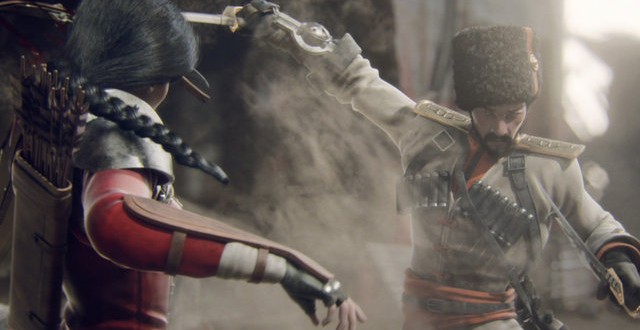 Battlecry is a new 32-player online action game that was announced today by Bethesda Softworks and Battlecry Studios. This game is the Austin-based studio’s first project and is being developed by “seasoned developers with decades of experience “, according to its Facebook page. The trailer certainly looks great, but the premise of Battlecry might be even better.

“Step into a bold, expressive world envisioned by Viktor Antonov (Half-Life 2, Dishonored) where gun powder has been banned following a cataclysmic world war at the dawn of the 20th century. Traditional warfare is now a relic of the past and all conflicts are settled head-on by elite teams of chosen warriors in sanctioned WarZones. Trained and bred for battle they face off for the glory of their nations.”

The art style is indeed reminiscent of Dishonored, but that’s where the similarities end. Battlecry focuses solely on the multiplayer action, and combines visceral brutality with striking art direction in order to achieve a new gameplay experience. The description mentions that gunpowder has been banned so we should expect to use only melee and steampunk inspired weapons. In regards to the combat, the studio wanted to take elements from single player games such as God of War and Devil May Cry, and bring them into the world of competitive multiplayer.

Players will get to choose between the Royal Marines and Cossacks factions, and battle it out in the game’s WarZones. Battlecry features a wide variety of interesting an innovative weapon types. Among them you will find swords that transform into shields, bows that can shoot steel-piercing arrows, electrified blades, and more. Players will be able to progress their warrior through ranks, with each rank unlocking brand new abilities and effects. The Archer, Brawler, Gadgeteer, Enforcer, and Duelist playable classes have already been revealed, with more to follow. Some of the game’s other features can be read below.

“Responsive, smooth controls unleash violent, high-impact, and stunning combo attacks previously reserved for modern brawlers. Dynamic movement allows you to seamlessly grapple, evade and mantle to quickly cover distances and evade the other team. Engage in combat and use the game’s Adrenaline system to unlock special powers for a short time or conserve Adrenaline to unleash your lethal Ultimate ability when the time is right. In BATTLECRY, your skill, timing, and teamwork create a diverse gameplay experience.”

Battlecry will only go into beta sometime next year. Fortunately, the company says that the game will be present at E3, and that it will be playable. Stay tuned for more news and updates

I’m Load The Game’s co-founder and community manager, and whenever I’m not answering questions on social media platforms, I spend my time digging up the latest news and rumors and writing them up. That’s not to say I’m all work and no fun, not at all. If my spare time allows it, I like to engage in some good old fashioned online carnage. If it’s an MMO with swords and lots of PvP, I’m most likely in it. Oh, and if you’re looking to pick a fight in Tekken or Mortal Kombat, I’ll be more than happy to assist! Connect with me by email markjudge (@) loadthegame.com only
@@MarkJudgeLTG
Previous Google Chrome to block extensions not found on its Web Store
Next It’s official: Apple acquired Beats Electronics for no less than $3 billion.