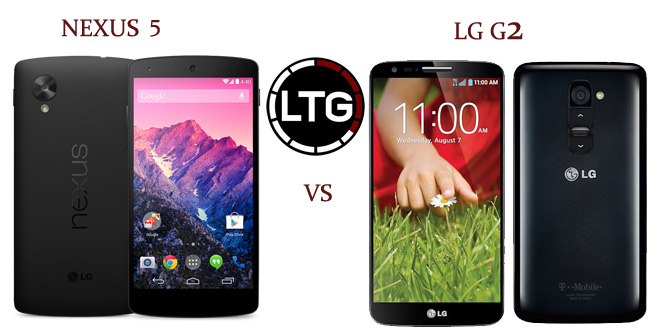 Recent developments have brought two solid phones to our attention once again. First, we have the Google Nexus 5, which we now know will be getting Android KitKat 4.4.3. In fact, the updates for the phone are already starting to roll out, so that’s one extra reason why the Nexus 5 still proves to be relevant and powerful, despite starting to show it’s age somewhat. On the other hand, we’re talking about the LG G2. LG’s flagship phone for 2013 is now getting replaced by the LG G3, a smartphone that’s already available in Asia and will become available in Europe and the United States at the end of July.

The LG G3 already impressed press members and those that were lucky enough to get some hands-on time with the device at its launch event. It’s every bit as good as the LG G2 proved to be in 2013, and might just be the top contender for the Phone of the Year Award. Yes, we’re not kidding, it’s that good. But that doesn’t mean that the previous model, the LG G2 is obsolete. Far from it. With an impressive battery life (unrivaled by any smartphone released this year), hardware that can still easily handle anything thrown at it and KitKat 4.4.2 support, it’s a phone you can’t go wrong with.

The best thing about it? It has no real draw-backs (apart from the lack of microSD support, so go for the 32 GB version), and it’s rather affordable. Right now, most US carriers offer the phone for $499, free of contract. If you dig around hard enough, you can pick it up for as low as $450 from some retailers. For that price, you really can’t find a better phone (okay, perhaps the OnePlus One brings slightly better value, but that phone is extremely hard to come by). If you’re patient enough, perhaps you should wait awhile longer. Once the LG G3 becomes widely available, the price of the LG G2 is likely to drop another $50 or so, making it a great medium-budget purchase.

Let’s not ignore the Nexus 5 either though. The phone has established itself as a force to be reckoned with, and while it’s not as powerful as the LG G2, it’s also more affordable. The 16 GB version is available for $449 at BestBuy, and you can find even better deals. In fact, you can get as low as $380 on a 16 GB Nexus 5, and around $420 for the 32 GB version. That’s still great value for the dollar, especially considering how good the Nexus 5 also is.

If that wasn’t enough, the Google Nexus 5 is also eligible for Android KitKat 4.4.3 now, which should ensure its future appeal for a long time. It’s getting it way ahead of the LG G2 (or any other smartphone, for that matter), so if you want the latest OS in your palms, the phone is a no-brainer. It’s going to eventually get replaced by the Google Nexus 6, but that device is still in rumor-phase and is unlikely to come out for the next few months. Right now, the Nexus 5 remains a solid buy, so if you like what you see, don’t hesitate.

Overall, both the LG G2 and the Nexus 5 come highly recommended. It all comes down to preference (LG makes both phones anyway), but you won’t go wrong with either. The LG G2 is slightly better but is also slightly more expensive, while the Nexus 5 is the first to get KitKat 4.4.3 support. These two remain top-dogs in the medium-budget segment, and few phones can rival either of them. You can take a look at their full specs below!

I’m Load The Game’s co-founder and community manager, and whenever I’m not answering questions on social media platforms, I spend my time digging up the latest news and rumors and writing them up. That’s not to say I’m all work and no fun, not at all. If my spare time allows it, I like to engage in some good old fashioned online carnage. If it’s an MMO with swords and lots of PvP, I’m most likely in it. Oh, and if you’re looking to pick a fight in Tekken or Mortal Kombat, I’ll be more than happy to assist! Connect with me by email markjudge (@) loadthegame.com only
@@MarkJudgeLTG
Previous The Witcher 3: Sword of Destiny trailer and release date revealed
Next League of Legends: Summoner’s Rift update coming soon