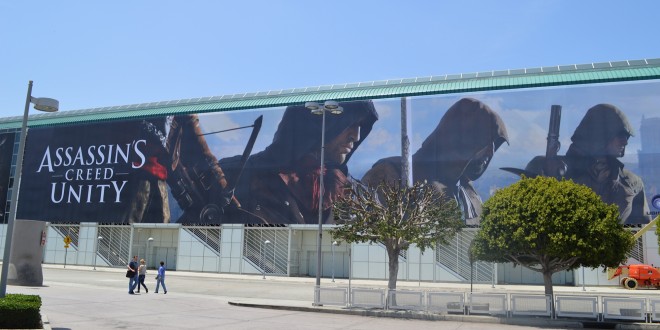 A huge Assassin’s Creed Unity banner covers one of the exterior walls of the Los Angeles Convention Center, the place where E3 is scheduled to begin shortly. The massive poster depicts four different assassins, as well as part of the tower we’ve seen in the trailer. We believe this banner suggests that Assassin’s Creed Unity will feature a four-player co-op mode. Earlier reports also suggested something similar and now it appears we have confirmation as well. Those reports also revealed that two demos for Unity will be presented at the Electronic Entertainment Expo. Ubisoft didn’t mention anything  about demos, but they did confirm the game will most certainly be at the event.

The company revealed that you will be playing a brand new assassin this time around. They also said the game will take place during the French Revolution and will be set in Paris. “A new Assassin, a new era. Assassin’s Creed Unity has been built from the ground up as a next-gen game, offering a new way to experience the venerated franchise. Set during the French Revolution, Assassin’s Creed Unity unfolds during a time of unimaginable terror and unprecedented turbulence – the perfect backdrop for the ongoing battle between the Assassins and the Templars.”

Assassin’s Creed Unity is currently in development for Xbox One, PS4, and the PC. The game is scheduled for a Holiday season 2014 release, but an exact date has not be revealed yet. Aside from Unity, Ubisoft is said to also be working on another Assasin’s Creed game, which goes by the name of Comet. This tile is developed only for the Xbox 360 and PS3, and will be launched around the same time as Assassin’s Creed Unity. The company didn’t spoke too much about the game, but rumors suggest that Assassin’s Creed Comet is set in North America and you will get to play a Templar named Shay.

We assume more details about the two games will be revealed during Ubisoft’s E3 Media Briefing, which starts at 3 P.M. PDT. The company announced that they will be presenting a lot of games at the event, including some highly anticipated ones. Far Cry 4, Tom Clancy’s The Division, and The Crew are just a few of the confirmed titles. It looks like Ubisoft has prepared a strong line-up for this year’s expo and we’re very excited to hear all about it Stay tuned for all the latest news and updates.

I’m Load The Game’s co-founder and community manager, and whenever I’m not answering questions on social media platforms, I spend my time digging up the latest news and rumors and writing them up. That’s not to say I’m all work and no fun, not at all. If my spare time allows it, I like to engage in some good old fashioned online carnage. If it’s an MMO with swords and lots of PvP, I’m most likely in it. Oh, and if you’re looking to pick a fight in Tekken or Mortal Kombat, I’ll be more than happy to assist! Connect with me by email markjudge (@) loadthegame.com only
@@MarkJudgeLTG
Previous Destiny has higher resolution on Xbox One without the Kinect
Next 5 Great Google Chrome Extensions