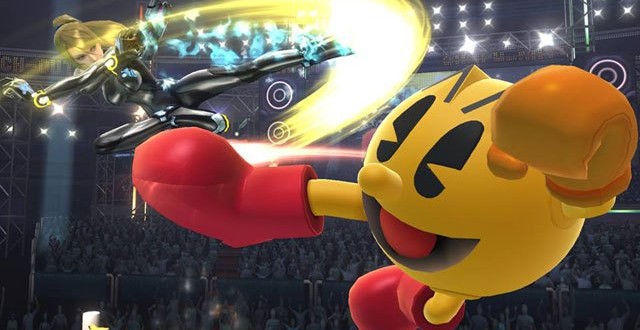 Super Smash Bros received a new addition to its already impressive rooster of video game legends. The latest character to join the line-up is none other than Pac-Man. With this new addition we now have four of gaming’s most popular icons in one place. The other famous characters I’m referring to are Sonic, Mario and Mega Man. These four are arguably the most well-known names in Super Smash Bros (and gaming in general), but the game features a bunch more characters you’ve probably heard also about. These include, but are not limited to: Charizard, Zero Suit Samus, Luigi, Zelda, Donkey Kong, Star Fox, Pikachu, Link, and Princess Peach.

Each fighter in Super Smash Bros has four special attacks: standard special, side special, up special, and down special. Each special attack can be customized and there are three variations for each direction. This means that every character will have twelve unique attacks. There are also equippable items in the game, which can be used to power-up your fighter. These items offer attack, defense, or speed enhancements and can be collected by playing through the various game modes. As a side note, items only affect your character’s attributes and will not change its appearance.

It was announced during Nintendo’s E3 digital event that more characters will be added to Super Smash Bros. We don’t know when or who, but somebody at Nintendo mentioned that he likes playing characters that have not been announced yet. This means that new fighters are currently in development and will probably be revealed at some point in the near future. Super Smash Bros will be arriving for the 3DS on October 3rd. A Wii U version of the game is also in the works and will be released sometime during the fourth quarter of the year. Stay tuned for more news and updates.

I’m Load The Game’s co-founder and community manager, and whenever I’m not answering questions on social media platforms, I spend my time digging up the latest news and rumors and writing them up. That’s not to say I’m all work and no fun, not at all. If my spare time allows it, I like to engage in some good old fashioned online carnage. If it’s an MMO with swords and lots of PvP, I’m most likely in it. Oh, and if you’re looking to pick a fight in Tekken or Mortal Kombat, I’ll be more than happy to assist! Connect with me by email markjudge (@) loadthegame.com only
@@MarkJudgeLTG
Previous Vodafone UK offers the Samsung Galaxy S5 with a free Gear Fit
Next Everybody’s Gone to the Rapture gets new trailer and details