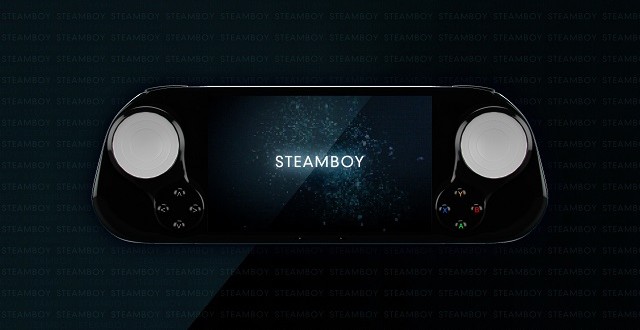 SteamBoy lets you play Steam games on the go

SteamBoy is an upcoming handheld gaming console that lets you play most of the games available on Steam. The project was revealed at E3 2014 by the Steamboy Machine Team, a third party company not affiliated with Valve. The console itself looks like a hybrid between the PS Vita and the latest Steam Controller. The company describes their product like this: “There’s a new Machine in town and it’s a game changer. With amazing power and unrivaled connectivity, Steamboy lets you take your Steam titles anywhere you want.”

We don’t have the full specs for SteamBoy yet, but sources say that the console with feature something along the lines of 4GB RAM, a Quad-Core CPU, and 32GB built-in memory card. The device also sports a 5-inch touchscreen with 16:9 aspect ratio and comes with two touchpads, 8 action buttons, 4 triggers, and two more buttons on the rear. “SteamBoy won’t be as powerful as other announced Steam Machines in the same way [the] Nintendo 3DS or PS Vita performance is not comparable to Wii U or PlayStation 4,” a Steam Machine Team representative said. “However, it will be possible to play the majority of current games in Steam.”

I’m very curious to see if they can actually do this. There are a plethora of games on Steam, which have a wide range of system requirements so SteamBoy’s hardware will really have to be quite impressive in order to support all of them. The idea itself is really good and taking you Steam library with you and playing on the go is pretty much any PC gamer’s dream. We have no idea how much this mobile gaming console will end up costing but hopefully we’re going to find out sometime during the following months. Stay tuned as we bring you all the latest news and updates.

I’m Load The Game’s co-founder and community manager, and whenever I’m not answering questions on social media platforms, I spend my time digging up the latest news and rumors and writing them up. That’s not to say I’m all work and no fun, not at all. If my spare time allows it, I like to engage in some good old fashioned online carnage. If it’s an MMO with swords and lots of PvP, I’m most likely in it. Oh, and if you’re looking to pick a fight in Tekken or Mortal Kombat, I’ll be more than happy to assist! Connect with me by email markjudge (@) loadthegame.com only
@@MarkJudgeLTG
Previous Only on PlayStation sale will begin tomorrow, new releases
Next The Android patents that Microsoft was hiding have been revealed