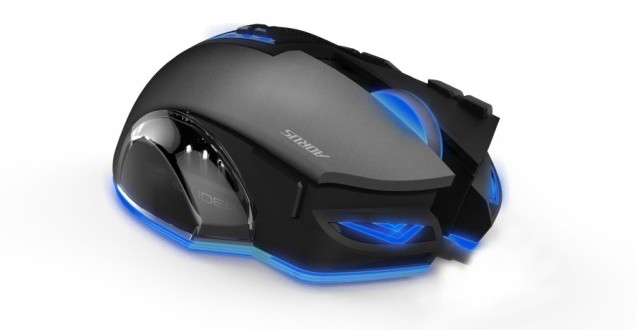 Aorus is taking online gaming to a whole new level with the Thunder M7 MMO Gaming Mouse. It is a well known fact that this genre has been growing exponentially these last few years and is considered to be the most popular around alongside MOBAs. The M7 is specialized for both types of games and comes equipped with 16 programmable macro buttons to help you with your noob pawning endeavor. 11 buttons are found on the sides with 8 of them being located on the left and optimized for the thumb. The Aorus M7 MMO Gaming Mouse offers instant execution of commands with maximum efficiency that will make you a lean, mean killing machine.

“The AORUS THUNDER M7 is specifically designed for MMO gamers, who emphasize on emitting accurate and fast attack commands on the battlefield; therefore, AORUS developed the best allocation of the MMO hot-keys with great effort and time to bring the most ergonomically mouse for the gamers. The AORUS THUNDER M7 features with 16 programmable buttons; eight of them are located nearby finger tips while gamers hold the mouse. When pressing the buttons with your thumb from various angles, the gamers can easily emit each different attack which was pre-configured individually.”

The mouse features 4 buttons that will allow you to change between 800/1600/3200/5600 DPI with one click. But in case you need more, there are two other buttons that will allow you to gradually increase the DPI up to a maximum of 8200. Aorus’ Thunder M7 MMO Gaming Mouse also features a Macro Engine that memorizes up to 70 macros and lets you switch between 5 different gaming profiles on the fly. To top it all off, the Thunder M7 sports Omron switches that are only extremely responsive, but also last up to 20 million clicks. For more information about specs and availability check out the official website here.

I’m Load The Game’s co-founder and community manager, and whenever I’m not answering questions on social media platforms, I spend my time digging up the latest news and rumors and writing them up. That’s not to say I’m all work and no fun, not at all. If my spare time allows it, I like to engage in some good old fashioned online carnage. If it’s an MMO with swords and lots of PvP, I’m most likely in it. Oh, and if you’re looking to pick a fight in Tekken or Mortal Kombat, I’ll be more than happy to assist! Connect with me by email markjudge (@) loadthegame.com only
@@MarkJudgeLTG
Previous San Diego Comic-Con bans the use of Google Glasses during panels
Next Telltale Games confirms The Walking Dead Season 3 during SDCC 2014