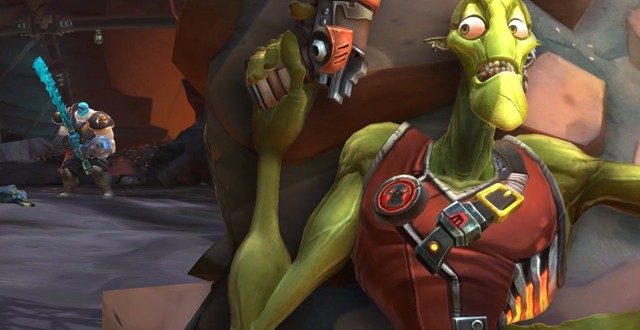 The second major content drop for WildStar has arrived and it goes by the name of Sabotage. The patch brings a lot of changes to the game, but the most important one is the addition of the new Daggerstone Pass PVP area. This Battleground can be accessed once a player hits level 30 and is basically a 15v15 bloodbath. Ok, I might be exaggerating a little bit here. Daggerstone Pass has a list of objectives that players will need to complete in order to win and there are surprises lurking at every turn. But the Battleground definitely also offers of a lot of mayhem and destruction. In other words, it’s a lot of fun! Practice brackets are available at level 30-49 and level 50, and there is a rated version of Daggerstone Pass as well, also at level 50.

Sabotage brings a lot more changes to WildStar but the full patch notes contain “roughly 14,000 words of updates, changes and more” so we’ll just try to talk about some of the highlights here. Most of the changes are aimed at the Player vs Player component of the game. For example, changes made to the gear now allow you to be much more efficient while wearing PVP items than PVE items in battlegrounds and other PVP situations. Also, PVP Offense has been expanded to include a healing component and has been renamed to PVP Power. This stat has two separate components: healing and damage. The PVP Defense also underwent some changes and is now a direct counter to an opponent’s PVP Damage. WildStar also underwent a great number of other changes with the introduction of Sabotage. Some of these include:

As mentioned, the full list of patch notes is downright massive so go check it out on the WildStar Report website if you want to see the whole thing. Stay tuned for more news and updates.

I’m Load The Game’s co-founder and community manager, and whenever I’m not answering questions on social media platforms, I spend my time digging up the latest news and rumors and writing them up. That’s not to say I’m all work and no fun, not at all. If my spare time allows it, I like to engage in some good old fashioned online carnage. If it’s an MMO with swords and lots of PvP, I’m most likely in it. Oh, and if you’re looking to pick a fight in Tekken or Mortal Kombat, I’ll be more than happy to assist! Connect with me by email markjudge (@) loadthegame.com only
@@MarkJudgeLTG
Previous No Man’s Sky not PS4 exclusive after all, also coming to PC
Next The Sims 4 owners will receive rewards if they also own The Sims 3