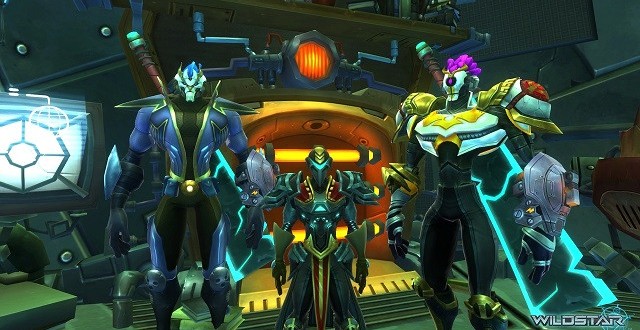 The first major content drop for WildStar was released not that long ago, but NCSoft already announced the next update complete with details and DevSpeak video. Going by the name of Sabotage, the patch will focus on PVP this time around and consists of a brand new 15v15 battleground. The action takes place on Daggerstone Pass, the newly introduced map that can be accessed once you reach level 30. You and your teammates will have to capture and hold certain objectives, which cause the enemy base to take damage as long as you control them.

This is only the warm up however, the real fun of Sabotage comes from the fact that ticking time bombs are randomly spawned in your base. Picking up the bombs and throwing them at the enemy is not only allowed, it’s actively encouraged. The only way of winning the battleground is by destroying the enemy fusion core, which coincidentally only takes damage from bombs. You will also find three strategically placed satellite uplinks on the map. You can use these to call in airstrikes and drop even more bombs on the unsuspecting enemy team. But Sabotage is about more than just bombing your opponents, although that’s definitely the most interesting part. There is a story to all of this apparently, and it goes something like this:

“When Exile settlers intent on building an ore mine arrived in Daggerstone Pass at the same time as a Dominion scientific expedition there to plumb the treasures of the nearby Eldan ruin, things were sort of touch and go at first. After several meetings, both sides agreed to a 30-second “delay of hostilities.” After much debate within their respective groups, the commanders of both sides met, famously shrugged, and simultaneously uttered the now iconic phrase, “Let’s fight now…” The violent battle for the whole enchilada has raged steadily and inconclusively ever since. It is said that sometimes on a dark night, if one listens carefully between the constant deafening bomb explosions, one can hear the soulful kibitzing of sidelined miners, archeologists, and real estate developers hoping in vain for a chance to work… “

There are, of course, rewards for participating in the battleground. Aside from adding a multitude of new achievements to WildStar, Sabotage can also earn you 10 new house decor items and a special pair of boots, which boosts a random stat by 44, and can be used to activate satellite uplinks in Daggerstone Pass.

I’m Load The Game’s co-founder and community manager, and whenever I’m not answering questions on social media platforms, I spend my time digging up the latest news and rumors and writing them up. That’s not to say I’m all work and no fun, not at all. If my spare time allows it, I like to engage in some good old fashioned online carnage. If it’s an MMO with swords and lots of PvP, I’m most likely in it. Oh, and if you’re looking to pick a fight in Tekken or Mortal Kombat, I’ll be more than happy to assist! Connect with me by email markjudge (@) loadthegame.com only
@@MarkJudgeLTG
Previous Nvidia is launching the Shield Tablet, an Android KitKat-based gaming tablet
Next Naughty Dog has not ruled out bringing back Jak and Crash Bandicoot