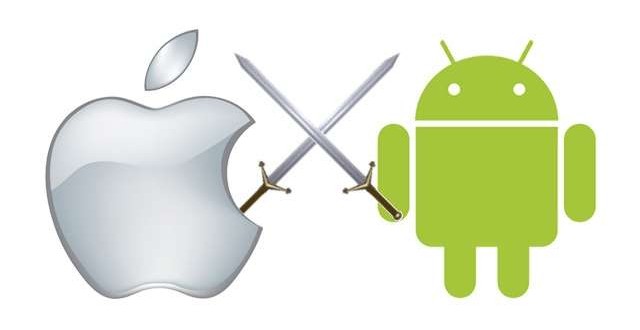 The iOS vs Android battle is currently just as fierce as the Xbox vs PlayStation or Coke vs Pepsi battles. Obviously, battles like these are waged between consumers and not the products themselves. In this particular case we wont try to speculate on which one is better and instead we’ll look at some solid figures provided by Net Applications (via Forbes) regarding user online activity. The numbers reveal that in the second quarter of the year 44.62% of users were on Android while 44.19% were using the iOS. The rest of them were on other operating systems such as BlackBerry, Kindle, Windows Phone, Symbian, and Java ME. Android only takes up a slightly bigger slice of the pie chart as you can see, but there is an important aspect that needs to be mentioned.

iOS takes up about 12% of the total market share in terms of devices sold while Android can take credit for around 85%. This means that the number of Android users is roughly seven times bigger than iOS users. In turn, this suggests that the average iOS user is about seven times more active online than the average Android user given that the total number of people using one OS is almost equal to the total number of people using the other. This data comes from over 40.000 websites monitored by Net Applications for traffic coming from smartphones and other mobile devices.

The reason for the Android’s popularity is a very simple one. Contrary to popular belief, most people just want an average phone that can be used for talking and texting, and doesn’t required them to pay an arm and a leg to get it. A wide range of cheap and easy to use devices run on the Android so the choice is pretty simple. iOS devices on the other hand are usually pretty high-end and too expensive for the average Joe, especially in low income countries. That being said, people who do end up purchasing an iOS device are more likely to be interested in all of its features and that includes going online. However, we’re seeing that Android is starting to win the online activity battle against iOS due to the high number of people using it.

But this may soon change as Apple is planning to announce the iPhone 6 this September and the smartphone is believed to run on the new iOS 8 operating system. The company already ordered 70 million to 80 million units so they expect to make a large number of sales in the near future. Most people will surely use the device for online purposes so the numbers will likely be in the favor of iOS in the third quarter of the year and maybe even the fourth.

I’m Load The Game’s co-founder and community manager, and whenever I’m not answering questions on social media platforms, I spend my time digging up the latest news and rumors and writing them up. That’s not to say I’m all work and no fun, not at all. If my spare time allows it, I like to engage in some good old fashioned online carnage. If it’s an MMO with swords and lots of PvP, I’m most likely in it. Oh, and if you’re looking to pick a fight in Tekken or Mortal Kombat, I’ll be more than happy to assist! Connect with me by email markjudge (@) loadthegame.com only
@@MarkJudgeLTG
Previous Assassin’s Creed Unity map is similar in size to the actual map of 18th century Paris
Next iPad Air 2 leaks again, said to arrive one month after the iPhone 6