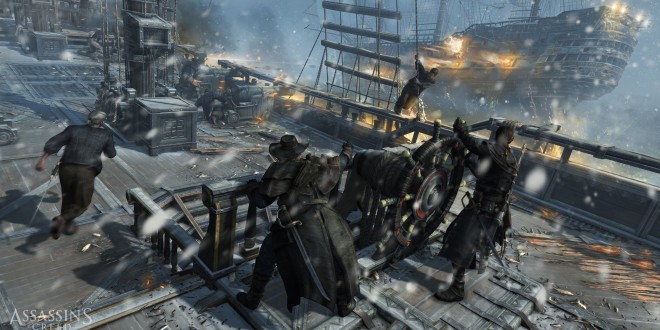 Ubisoft has released a new gameplay trailer for its upcoming last entry in the Kenway saga – Assassin’s Creed Rogue. As expected, the footage focuses on protagonist Shay Patrick Cormac as he briefly describes his transition from assassin to templar. Shay mentions that the assassin order to nothing more than a lie, choosing to end innocent lives instead of preserving them, and that the templars are in-fact the ones issuing true justice. Also, is that Achilles Davenport fighting Shay? Ubisoft had indeed previously-mentioned that Connor’s mentor would be present in this prequel to Assassin’s Creed III, and that Rogue will show us why Ratonhnhaké:ton must rebuild the entire order (probably because Shay manages to kill almost all of them; just a thought).

Assassin’s Creed Rogue launches on November 11th in North America and November 13th in Europe, exclusively on the PlayStation 3 and Xbox 360. If you’re a current-generation/PC-exclusive gamer and would also love to experience Rogue – don’t worry; given the fact that Assassin’s Creed: Liberation managed to be ported from the PlayStation Vita to the PS3, 360, and PC, I wouldn’t see why Ubisoft wouldn’t port Rogue to  your platform of choice, as well. Maybe after Assassin’s Creed Unity’s buzz dies down? Of course, this is simply my own speculation; nothing has been officially announced.

If you’re new to Assassin’s Creed Rogue, know that the game takes place in the mid-18th century during the Seven Years’ War, and follows Shay Cormac, an assassin-turned-templar. Shay is eventually betrayed and abandoned by the assassins after an assignment ends in disaster, and so turns to the templar order, offering his services as an assassin hunter. Given access to near-limitless resources, Shay sets out to exact his revenge, with his actions having dire consequences for the future of the brotherhood. Gameplay in Assassin’s Creed Rogue will be similar to that of Black Flag, with a mixture of ship-based naval exploration and third-person land-based exploration.

I’m Load The Game’s co-founder and community manager, and whenever I’m not answering questions on social media platforms, I spend my time digging up the latest news and rumors and writing them up. That’s not to say I’m all work and no fun, not at all. If my spare time allows it, I like to engage in some good old fashioned online carnage. If it’s an MMO with swords and lots of PvP, I’m most likely in it. Oh, and if you’re looking to pick a fight in Tekken or Mortal Kombat, I’ll be more than happy to assist! Connect with me by email markjudge (@) loadthegame.com only
@@MarkJudgeLTG
Previous Bayonetta 2 gets a European release date, special editions, costumes & more
Next Blizzcon 2014 Virtual Tickets now available