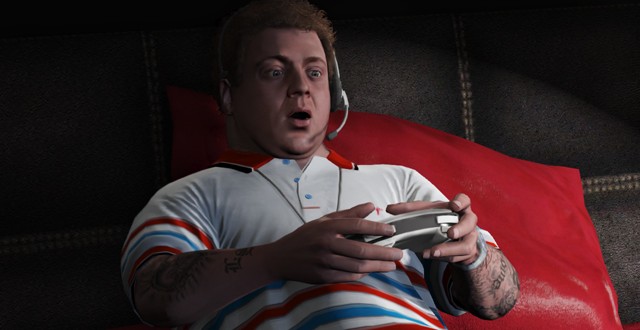 A while back Rockstar Games announced that contrary to rumors, the release date for GTA 5 has not been changed and the game is still scheduled to launch later this year. “I’m also looking forward to the PC release, however this release date has not changed,” someone from Rockstar said on the support page. But this announcement was only referring to the PC version and now a major Australian retailer who goes by the name of Big W claims that the PS4 and Xbox One versions of GTA 5 will only be released in Spring 2015. The retailer recently sent an open letter to its customers informing them about the delay and apologizing that it previously said that the game will come out in November. The notice can be seen below. 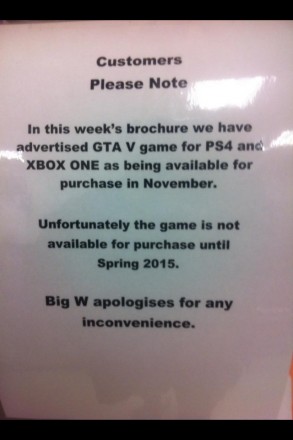 Now, as far as I know, GTA 5 will release on the same day across all platforms so this must mean that the PC version has also been delayed until Spring 2015. On the other hand, maybe the game is only being delayed in Australia, although that would undoubtedly be a truly massive delay. Unfortunately Rockstar didn’t make an official announcement regarding a release date when they said that GTA PC has been delayed so we’re still left guessing. Various retailers are listing the game as launching in late October or early November, but this is the first time I’ve seen a retailer saying that the game has been delayed until 2015. Admittedly, this wouldn’t be all that strange seeing as how a plethora of games have already been delayed this year.

For the moment I’ll just have to trust Rockstar and hope that GTA 5 will indeed come out this Fall, but will it come out on all platforms? Again, they only mentioned the PC so who knows? It’s a well known fact that everybody’s crazy about having their games run at 1080p and 60 fps these days so Rockstar may need more time to make it happen on the PS4 and Xbox One. Indeed, GTA 5 wouldn’t be the first game to suffer a delay because of the resolution. The latest word on the street is that we should expect GTA 5 to hit the shelves on either October 28th of November 4th. We’ll let you know as soon as we learn something for certain so stay tuned.

I’m Load The Game’s co-founder and community manager, and whenever I’m not answering questions on social media platforms, I spend my time digging up the latest news and rumors and writing them up. That’s not to say I’m all work and no fun, not at all. If my spare time allows it, I like to engage in some good old fashioned online carnage. If it’s an MMO with swords and lots of PvP, I’m most likely in it. Oh, and if you’re looking to pick a fight in Tekken or Mortal Kombat, I’ll be more than happy to assist! Connect with me by email markjudge (@) loadthegame.com only
@@MarkJudgeLTG
Previous Project Tango tablet leaked through FCC
Next Sony tries to keep PS3 alive through several games + consoles bundles