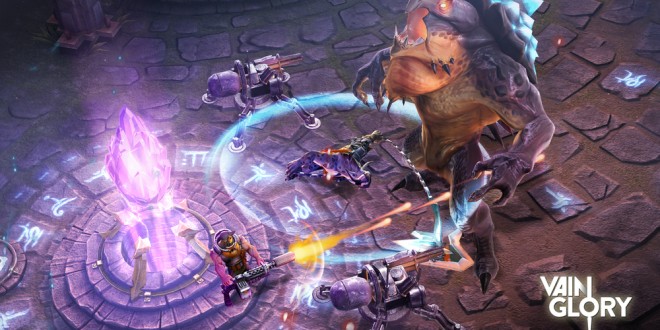 Back in June during the WWDC Apple unveiled Metal, a new gaming technology for the iOS 8. One of the titles used to showcase this new tech at the event was Plants vs Zombies: Garden Warfare and it did look pretty nice if I do say so myself, but now we have something even better. Apple finally announced the iPhone 6 and they also unveiled a new MOBA game called Vainglory to show off the graphical capabilities of Metal on the smartphone. For those unfamiliar with MOBA games, more well-known titles from this genre include Dota 2, League of Legends, Smite and the upcoming Heroes of the Storm, to name just a few. But unlike the aforementioned games, Vainglory was specifically designed for mobile devices such as the iPhone 6 and iPhone 6 Plus.

The game is being developed by Super Evil Megacorp and it’s the studio’s first title. However, the people working at the studio are veteran devs who formerly worked at major companies such as Blizzard, Riot, Guerrilla, Rockstar and Insomniac so they definitely know what they’re doing. So how is Vainglory different than Dota 2 and the like? Well, the biggest difference is that here each of the two teams only consists of three players and not five like in traditional MOBAs. Most matches are also expected to last only about 20 minutes or so, although you can have shorter matches in Dota 2 and League of Legends as well at times so this isn’t a such huge difference. Aside from that, it’s pretty much what you’d expect. Actually, it may be a bit more than you’d expect if you play it on the iPhone 6 thanks to the iOS 8 with Metal, which makes it look really impressive.

Earlier today Apple showcased new lighting and particle effects for Vainglory while the game was running on the iPhone 6 Plus. “Thanks to Metal and our E.V.I.L. game engine, Vainglory can now deliver a level of graphics performance and resolution beyond that of a Blu Ray player on a new HD TV,” Super Evil Megacorp said in a blog post. “That’s higher quality than most current game consoles can deliver—in your bare hands! As core gamers and makers of core games, we couldn’t be more excited about the possibilities this opens up for Vainglory and touch-screen gaming.”

Vainglory is still in the testing phase and will begin rolling out next month in Southeast Asia, Australia and New Zeeland, with more regions to follow in December. The game will be available on iPad 2 and above, iPhone 6 and iPhone 6 Plus.

I’m Load The Game’s co-founder and community manager, and whenever I’m not answering questions on social media platforms, I spend my time digging up the latest news and rumors and writing them up. That’s not to say I’m all work and no fun, not at all. If my spare time allows it, I like to engage in some good old fashioned online carnage. If it’s an MMO with swords and lots of PvP, I’m most likely in it. Oh, and if you’re looking to pick a fight in Tekken or Mortal Kombat, I’ll be more than happy to assist! Connect with me by email markjudge (@) loadthegame.com only
@@MarkJudgeLTG
Previous EA Games is developing games for iPhone 6 and iWatch
Next Google buys Lift Labs