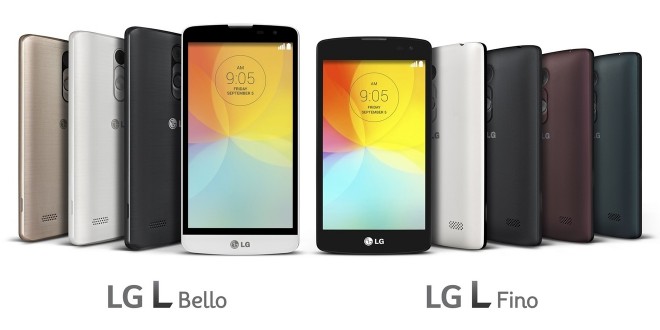 LG L Fino and L Bello to be available world-wide

The LG L line was designed with emerging 3G markets, teenagers and first-time smartphone buyers in mind. The LG L Fino has a 4.5 inch WVGA 480*800 resolution IPS display with 207ppi. a 1.2GHz quad-core processor backed by 1GB of RAM and 4GB internal storage 8 MP rear cam and VGA front camera, 3G support and a 1900 mAH battery. You will be able to get the LG L Fino in White, Black, Gold, Red, Green color options. The price of either handsets has not yet been disclosed, but since they are mid-range phones designed for emerging markets, they probably won’t go over $200.

The LG L Bello on the other hand features a 5 inch FWVGA 480*854  IPS display with 196ppi, a 1.3GHz quad-core CPU, 1GB RAM, 8GB internal storage, 8 MP rear camera with autofocus and a 1 MP front camera and 3G support.  The LG L Bello will have a bigger battery than the LG L Fino, a 2540mAh one. This handset will be available in White, Black, and Gold.

Both smartphones in the LG L line will be powered by Android 4.4.2 KitKat with an UI designed with the LG G3 in mind. The UI includes Touch and Shoot feature, Gesture Shot, Front Camera Light, Knock Code. The LG L phones will also be compatible with the new QuickCircle cases launched alongside the LG G3.

Another device has been rumored to be launched by LG, the LG G2 Lite, with specs almost identical to those of the LG L Fino and to those of Motorola’s Moto G. The LG G2 Lite will set you back about $300 and it is also intended as a mid-range phone to compete with Motorola’s Moto G (2014). Since the LG G2 Lite is more of a rebranded LG L Fino, we don’t know why it would become more successful than the Fino. Nonetheless, the more the merrier, so LG should keep rolling out affordable mid-range, and high-end phones, too.

My life-long dream has been to test out every gadget on the market! Considering the fact that I've rapidly destroyed almost every gadget I've had so far, I'm not inclined to owning something, so my ideal outcome would be to have a different gadget each month. I'm really into smartphones, wearables and tablets and I love Playstation and Xbox, I'm sure I'll beat you at your own game (after a month of training... or two)
Previous MacBook Air with Retina and Core M chip launching mid-2015
Next Paul McCartney’s contribution to Destiny’s soundtrack was ‘on the house’