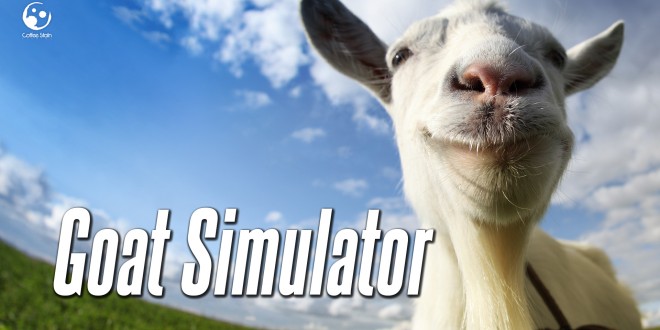 Goat Simulator is coming to Android and iOS

While most gaming journalists are still writing about this month’s major release, “Destiny”, I chose to announce our readers of a rather different game: Goat Simulator. Released on the PC on April 1st, 2014, it is also coming on iOS and Android. This game is what the title says. A hilarious game that puts players in the…er, hooves of a goat. All you have to do during this game is to provoke as much destruction as possible in the town that you are in.

The game was developed by Coffee Stain Studios as a joke and was shown in Alpha stages through YouTube videos. Due to the game’s increasing popularity, the developer decided to make a release-able version of the game and launch it. Of course, the release had various non-breaking bugs and glitches, but they were only making the game even more enjoyable. Some elements of Goat Simulator’s gameplay include jumping, running, bashing things and licking objects. The latter action attaches the goat’s tongue to the respective object, allowing the player to drag the object until they want to let it go. You can also have the goat bounce off trampolines or launch it into the air through large fans.

A few days ago, the game’s lead developer, Armin Ibrisagic, announced on his Twitter account that Goat Simulator is going to be released on iOS and Android and that it will contain all the bugs from the PC version. The game will be available starting tomorrow for your handheld devices and it can be bought for $4.99 from the respective app stores.

Goat Simulator for iOS and Android is coming on 18th of September! – Price point: $4.99 – We have included all the bugs from the PC version

British developer “Double Eleven”, known for games such as LittleBigPlanet or Limbo for PS Vita are going to port “Goat Simulator” on the Xbox One. A release date for this version is not yet known. All in all, Goat Simulator, while being a weird game, is also a lot of fun for gamers who prefer to entertain themselves instead of judging and criticizing. Yes, the bugs are there and they will be there in the Android and iOS versions as well, but they are not a bad thing. On the contrary, they are part of the game and contribute to its fun factor.

I'm a journalism graduate and an occasional gamer. As a kid I used to own a NES clone called "Terminator 2", which was hugely popular in my country. I like old school games and adventure games but I occasionaly play RPG's and Shooters as well, though I wouldn't call myself an expert at these kinds of games. When I'm not writing or playing games I prefer reading detective or fantasy novels.
Previous Rock climbing made easy by prosthetic leg
Next Unreal Engine 4 will offer support for both Samsung Gear VR and Google Project Tango