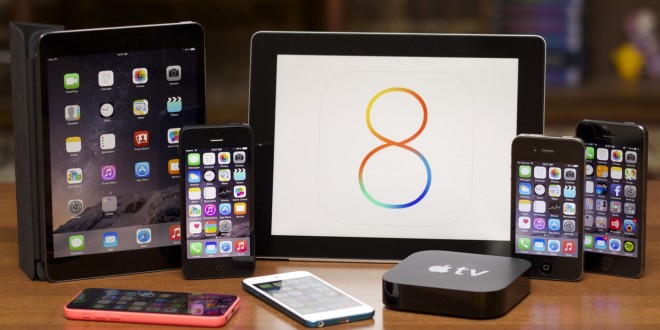 iOS 8 has just been launched by Apple earlier, after being teased at the Flint Center show where the company announced the iPhone 6, iPhone 6 Plus, Apple Watch, Apple Pay and gave a little inside information on Apple’s HealthKit and fitness monitoring features incorporated in the new devices. iOS 8 was pretty anticipated among Apple mobile device users because it had promised better integration among different devices and a whole new set of features to benefit from.

Apple had incorporated an NFC chip into the new device line launched not so long ago, but sadly, they limited its function to Apple Pay for the time being, although they might open up the NFC chip to developers like they did with Touch ID when that was introduced. If NFC were available, maybe the number of new features on iOS 8 might have been increased, but the mobile OS still brings a lot of improvements compared to iOS 7.

First off, iOS 8 will be compatible with iPhone 4s and above, iPad 2 and above, both iPad Minis and the last generation ipod Touch. Apple’s Health app will only be available to iPhones and the iPod, so no iPad support, which is not such a big deal since there are few people who use their tablets for fitness and health metric monitoring. Would have been welcomed for sleep tracking and nutrition, though.

Whilst the iOS 7 UI was focused more on design and appearance than on functionality, Apple does the exact opposite with iOS 8, focusing more on introducing new features and functionality rather than redesigning the interface. One of the most appreciated updates in iOS 8 is app integration, whereas different kinds of applications can interact with each other in order to offer a more comprehensive and easy to use UI.

Continuity on iOS 8 is also a welcomed feature by many, because it allows a Mac and an iOS 8 device communicate with each other, provided they are signed in with the same Apple ID and are on the same network. Basically, it works like Pushbullet. You can take and send calls, receive notifications and share files via Airdrop. Handoffs are tasks that can be toggled back and forth between an OS X Yosemite and iOS 8 device, including webpages, mails, calendar entries, contacts, maps and notes. What’s neat about Handoffs is that it allows developers to add them to their own applications for iOS 8. 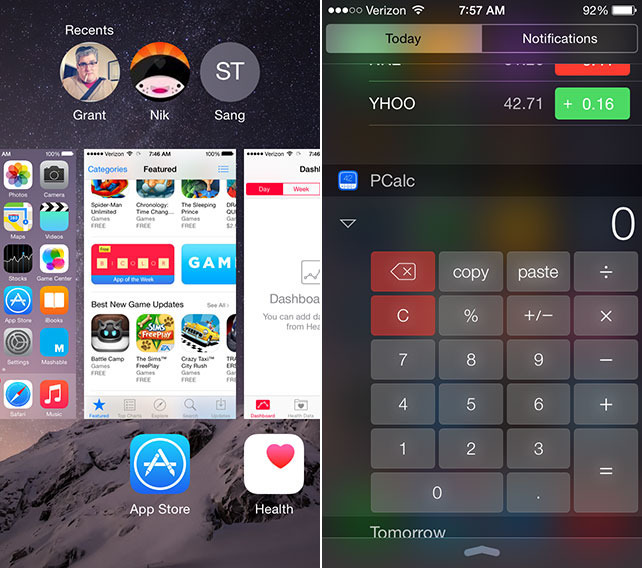 Widgets, custom keyboards and extensions have been added to iOS8, allowing for developers to create their own apps, widgets and extensions. A new feature on iOS 8 is that you will be able to multitask a little easier, meaning that you won’t have to exit each app every time you want to copy and paste something or directly act on notifications. Developers are now allowed to add their apps to the Share Sheets on iOS 8 as well, besides being allowed to add their apps to the action icons at the bottom. Predictive text input has also been finally added to iOS 8 via QuickType.

The Health app is a novelty and it offers complete fitness tracking, health metrics and sleep tracking. HomeKit is also there on iOS 8 and it’s basically Apple’s home automation platform which you can use to control smart devices within your house. The family sharing feature might also come in handy for those who are locked into the Apple ecosystem in your household, allowing members to share photos, apps, games with a dab of parental control thrown in.

Spotlight has also been improved in iOS 8 allowing you to search for things not only locally, but on Bing, Wikipedia, app store, iTunes, etc. That’s a neat feature to see because it integrates your needs with your requests, meaning that you can not only use Spotlight to search for your own stuff, but you can search for a movie, a book, a gadget and things like that. Siri is now responsive to voice commands like Hey, Siri, too, which is a nice touch to the iOS 8 personal assistant. The only problem with this feature is that it’s only available when the device is plugged in. I can’t wrap my head around that. Apple says it’s because Siri would drain your battery, but it still kind of evades the whole purpose of voice activation. Messages, mail, camera and Safari have also been improved and tweaked to fit user preferences, allowing more customization and developer integration, which was a much needed feature. Wi-Fi calling has also been introduced by iOS 8, screen recording (when connected to Yosemite running Mac), power usage statistics for your apps have also been added.

Naturally, this is just an overview and short description of what’s actually new in iOS 8, because I wouldn’t want to write a 20k word article on the new OS. All of you who will be downloading iOS 8 will have to figure things out for yourself, which is kind of the point of an OS, in my opinion. You need to learn and discover all its features by yourself, otherwise you won’t even use them for what you should. I learned Windows by myself and I work infinitely better with it than my friend, who was taught how to work with the OS. Nonetheless, the discovery process of a new OS is always exciting, and iOS 8 is no exception.

As for my opinion, iOS 8 users, welcome to the future. Most of the new features on iOS 8 have been available on Android and Windows OS for quite some time now. And Apple is not a “bad person” for implementing these features so late, but it does show how much they value their own ecosystem and get greedy with their tech sometimes. Remember, that’s only my opinion. What’s yours? 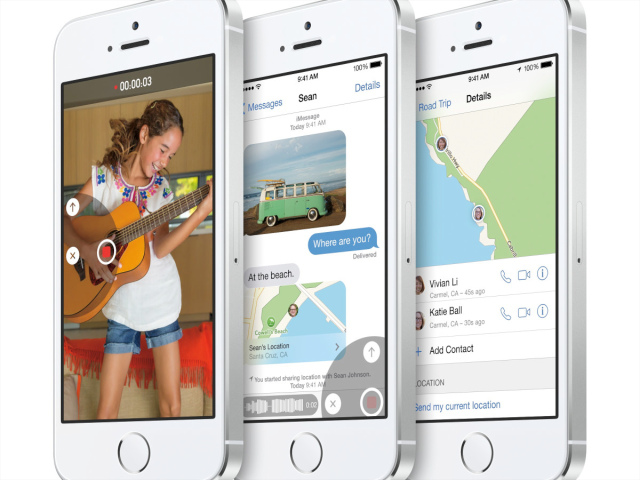 My life-long dream has been to test out every gadget on the market! Considering the fact that I've rapidly destroyed almost every gadget I've had so far, I'm not inclined to owning something, so my ideal outcome would be to have a different gadget each month. I'm really into smartphones, wearables and tablets and I love Playstation and Xbox, I'm sure I'll beat you at your own game (after a month of training... or two)
Previous Deus Ex: Human Revolution, Metro 2033, Mount & Blade and more cheap games available on the Humble Store
Next Destiny flying off the shelves: $325 million in 5 days