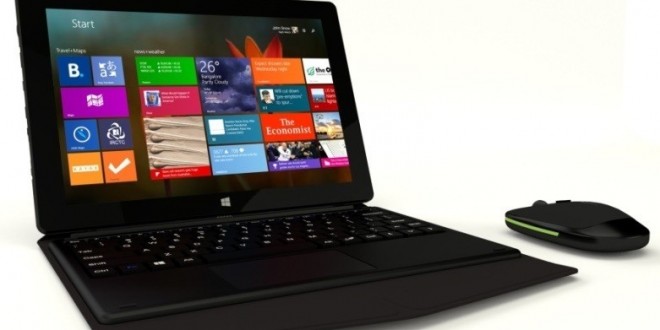 Notion Ink dares to dream again with the release of its new Windows tablet: the Cain. The India-based manufacturer has teamed up with Intel to create this crisp and elegant two-in-one tablet. The company’s previous shots at the market were not as on point as they would have hoped for. Notion Ink’s earlier releases, Adam followed by Adam II failed miserably to make a name for themselves, passing through almost unnoticed. Hopefully for Notion Ink, this will not be the case with newly arrived Cain.

The Cain 2-in-1 tablet is fueled by an Intel Atom 1.8 Ghz quad-core processor, and comes with a 10.1-inch WXVGA (1280×800) IPS LCD display with 10-point multi-touch, integrated Intel HD Graphics, 2 GB RAM with 32GB built in storage expandable through microSD, 2MP rear and front camera, USB 3.0 support, dual charging, detachable magnetic keyboard, and a 7900 mAh battery rated to deliver 7 hours of video playback and 10 hours of Internet surfing, as detailed on techspot.com. The Cain retails for $327, and is exclusively available for order on snapdeal.com. Rohan Shravan, Founding CEO of Notion Ink gives us his perspective on the new Cain tablet:

“Delivering the mobility of a tablet combined with the power of a laptop, 2 in 1 devices represent a new category of computing that meet users’ diverse needs from work to play. Powered by an Intel Atom Processor, Notion Ink’s CAIN 2 in 1 will deliver a compelling computing performance and great battery life to keep pace with today’s mobile lifestyle.”

The Cain seems to be a simple and elegant solution for those tablet users who are looking for a cheap and reliable alternative. The tablet will be pre-loaded with a one year subscription to Microsoft Office 365. Let’s see if this time Notion Ink will be able to hit it out of the park with Cain, and rebuild their market reputation.

I'm Razvan, a sports and first-person shooter enthusiast. I've always loved writing, even more so when it involves games. When I'm not playing on my PS3 or writing, I like to run exhausting cardio workouts, play soccer, watch a good movie, or read a good book.
Previous Battlefield 4 Patch out this month
Next Titanfall IMC Rising DLC details revealed

Intel was a big presence at CES 2015 this year, launching the new line of ...