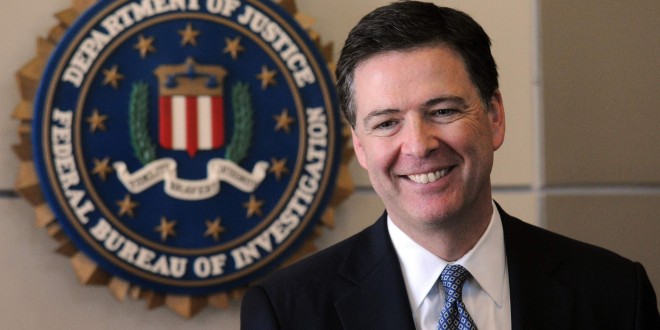 FBI director upset at encryption offered by Apple and Google

Security and privacy has been one of the main concerns of many smartphone, tablet, smartwatch and other mobile or wearable device users. Apple has responded to these concerns by offering encryption on all of its devices, and Google has done the same, announcing the feature on the upcoming Android 5.0 L version too. It seems that the FBI isn’t as glad about the news as the OEM and users.

The director of the Federal Bureau of Investigation, James Comey, has told Google and Apple that the FBI is concerned about these new privacy policies. The companies had announced previously that the type of encryption they will be using on devices will allow access to data stored by the users – only to the users, nobody else. The main idea behind the new privacy policy and encryption is that user data will not be made available to the companies offering the storage services, so that they won’t be pestered by the FBI or any other government agency or official to release user data. Yahoo has had a major issue with the FBI requesting its users’ data, and by refusing to comply, Yahoo was slapped with quite a fine, although just as a compelling technique. The fine set by the FBI was a daily fine that would increase each day Yahoo refused to hand over data.

There has been a lot of outrage against the FBI and other government agencies about the issue of requesting user data from companies, so that’s why Apple and Google decided to put privacy at the top of the list of main concerns. FBI director has expressed his concerns that these new privacy policies would put users “above the law”, allowing them to have singular access to their own content. The FBI director was outraged at the fact that this new policy would allow kidnappers and terrorists to be above the law.

There hasn’t been any threats made by the FBI and there’s no word on whether they will start meddling with the companies in question in order to get the privacy policy pulled and encryption levels back to normal. The issue is getting a lot of attention and it’s very likely that a scandal will ensue between the FBI and the aforementioned companies and their users. Do you think FBI director James Comey is right in saying that if access to user data stored on smartphones will be made unavailable to government agencies, they will be impeded in doing their job?

My life-long dream has been to test out every gadget on the market! Considering the fact that I've rapidly destroyed almost every gadget I've had so far, I'm not inclined to owning something, so my ideal outcome would be to have a different gadget each month. I'm really into smartphones, wearables and tablets and I love Playstation and Xbox, I'm sure I'll beat you at your own game (after a month of training... or two)
Previous Gionee Elife S5.5 available in the U.S. under a different name
Next Seek thermal camera allows heat vision on your phone