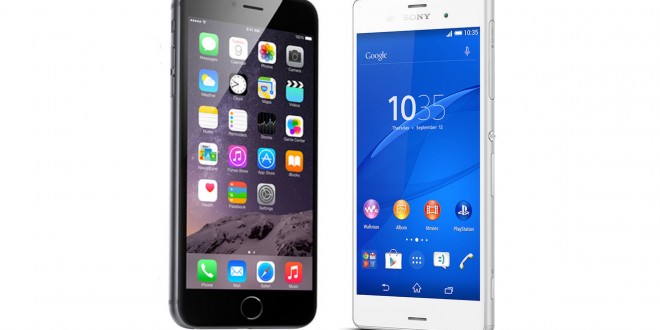 iPhone 6 Plus vs Sony Xperia Z3

It’s September and that means the iPhone fever is sweeping the world. Until now, the choice for most people was pretty easy: if you want a small, easy to pocket, intelligently designed and easy to use phone your best choice is the iPhone; if you like bigger screens and more customization, pick any Android flagship. With its latest two phones, Apple made a big leap from 4 inch screens to 4.7 inches for the iPhone 6 and 5.5 inches for the iPhone 6 Plus. Screen sizes for the average phone kept going up, there’s no flagship Android phone with a screen smaller than 4.5 inches since 2011. Having the option of a bigger screen is always enticing for customers.

Sony’s flagship phone was also launched in September: the Sony Xperia Z3. Like its predecessors, it features a big screen (5.2 inches), latest processor and a sleek design. The similarities between the iPhone 6 Plus vs Sony Xperia Z3 are obvious and past phones of the two brands have been very successful.

But the similarities between iPhone 6 Plus vs Sony Xperia Z3 end here. The approach to producing the best smartphone differs very much. Starting the dissection with the brains of the phones it’s clear Apple chose a different approach from the market. Instead of cramming more gigahertz and multiplying their cores, Apple switched to 64-bit chip technology starting with the previous phone: the iPhone 5s. That’s why iPhone has an Apple A8 1.4 Ghz dual core processor while the Sony features a 2.5 Ghz quad core to give a similar user experience. Points for Apple for changing the game. A big difference under the hood is the RAM. The iPhone has 1GB and the Sony has 3GB. This means more multitasking for the Sony. This feature is essential for future proofing a phone in today’s RAM consuming apps.

The displays on the two phones are both Full HD, IPS LCD panels that offer great accuracy and high contrast. There’s a size difference, albeit a very small one: the iPhone 6 Plus has an extra 0.3 inches. The Apple phone is also slightly bigger: 0.5 inches in height, 0.3 inches in width, but it’s slimmer by a mere 0.0.1  inches. In terms of weight, the Z3 is lighter by 20 grams – the iPhone being the heavyweight with 172 grams (6 ounces).

The cameras on both phones are top of the line in the industry. The iPhone cameras have always had a legendary status. There are international competitions aimed at photos taken with the device. For good reason too: the color reproduction and low noise make it perfect for a mobile camera. But ask yourself if you can deny yourself the 20.7 megapixels and ISO as high as 12800 of the Sony for the 8 megapixels of the iPhone. Apple compensates with a sapphire lens cover and true-tone flash, and also the knowledge that mobile photos are used mainly on the internet, where the difference between 8 and 20 megapixels is null.

If you’re still undecided, here’s a pros list for picking iPhone 6 Plus vs Sony Xperia Z3:

Reasons to pick the iPhone 6 Plus:

All things considered, both the Apple iPhone 6 Plus and the Sony Xperia Z3 are great phones. Whichever you choose, you shan’t be disappointed. The main difference is with the Android you have more freedom to change stuff and it might be awesome if you have the patience to make it the way you like it, where as with the iPhone everything is more neatly organized.

I’m Load The Game’s co-founder and community manager, and whenever I’m not answering questions on social media platforms, I spend my time digging up the latest news and rumors and writing them up. That’s not to say I’m all work and no fun, not at all. If my spare time allows it, I like to engage in some good old fashioned online carnage. If it’s an MMO with swords and lots of PvP, I’m most likely in it. Oh, and if you’re looking to pick a fight in Tekken or Mortal Kombat, I’ll be more than happy to assist! Connect with me by email markjudge (@) loadthegame.com only
@@MarkJudgeLTG
Previous Galaxy Note 4 vs OnePlus One – behemoth battle
Next Issues with iOS 8 updates appear

We learned earlier this year that a remake of Demon’s Souls is set to launch ...