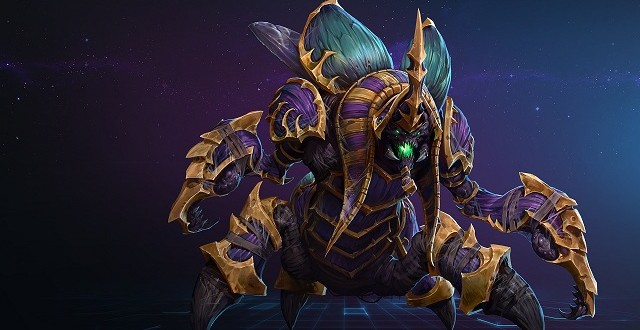 Heroes of the Storm designer reveals more details on Anub’arak

The latest hero introduced to Heroes of the Storm is one that Warcraft 3 players are most certainly very familiar with. You may have also seen him in World of Warcraft’s Wrath of the Lich King expansion where he was the final boss of the Azjol-Nerub dungeon. In any case, the hero in question goes by the name of Anub’arak and he is the most famous nerubian around. Game Designer Kent-Erik Hagman shared some very interesting details regarding him in the latest Developer Insights interview. Hagman says that the Heroes of the Storm version of Anub’arak is similar to the original one found in Warcraft 3. This means that he will get to use his iconic abilities including Impale and Carrion Swarm.

“Anub’Arak hails originally from Warcraft III, and in designing him, we wanted to respect a lot of what he represented in that game,” Hagman said. “To that end, we felt it just wouldn’t be Anub’arak without iconic abilities like Impale, Carrion Beetles, and Carrion Swarm. We also liked the feel of Burrow Charge and, given his fight in World of Warcraft, it seemed like a perfect fit. Having both Burrow Charge and Impale on his basic abilities means he excels at initiating a fight. As Anub’arak, you can expect to be diving backlines and forcing engagements for your team. Anub’arak has a handful of options to increase his abilities as a damage sponge for his team, from improving his Carapace shield to allowing the beetles he passively generates to heal him when they deal damage. Alternatively, there is a bit of a siege, split-pusher build in Anub’arak based around his beetles, as sometimes the best way to deal with an enemy team is to strike where they are not!”

Just like all the other heroes in Heroes of the Storm, Anub’arak also has two heroics to choose from. The nerubian’s heroics are called Web Blast and Carrion Swarm, and Hagman talked a bit about them as well. “Well Carrion Swarm is definitely a more-than-just-inspired ability from Warcraft III, and in bringing it over, it’s a natural fit for the in-the-fray warrior who needs to stay alive and deal damage to enemies around him. This heroic is for the Anub’arak that needs to stay active in the fight for his team, being a general pest and disrupting the enemy team. Web Blast, on the other hand, is much more about locking out a single target. It has a far lower cooldown, and can be used by Anub’arak in a variety of ways. In a teamfight, it can be used to lock out that high damage Valla or Tychus, or that pesky Malfurion healing the enemy team. Alternatively, if Anub’arak is able to catch an opponent out of position, he can lock down the target with Web Blast like a spider preparing its meal, and wait for his team to arrive!”

I’m Load The Game’s co-founder and community manager, and whenever I’m not answering questions on social media platforms, I spend my time digging up the latest news and rumors and writing them up. That’s not to say I’m all work and no fun, not at all. If my spare time allows it, I like to engage in some good old fashioned online carnage. If it’s an MMO with swords and lots of PvP, I’m most likely in it. Oh, and if you’re looking to pick a fight in Tekken or Mortal Kombat, I’ll be more than happy to assist! Connect with me by email markjudge (@) loadthegame.com only
@@MarkJudgeLTG
Previous Google warned by Germany to rethink data profiling policy
Next Dragon Age: Inquisition new trailer showcases crafting and customization