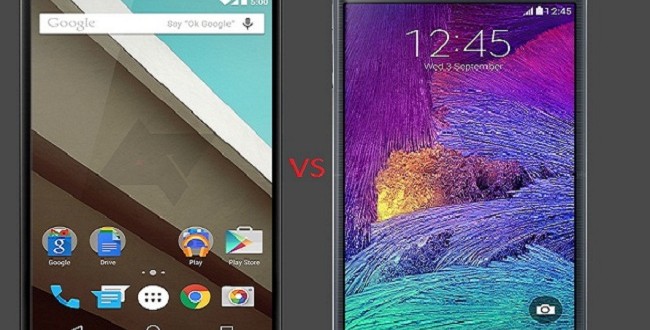 Samsung is infamous for offering some of the biggest smartphones ever in the form of the Note series. The company gambled a bit when it released the first ‘phablet’ as it wasn’t sure if people would really be interested in such huge devices. Now we can safely say that the gamble paid off seeing as how the Note series is more popular than ever. Last month the Korean tech giant finally announced the Samsung Galaxy Note 4, a 5.7-inch giant with a very impressive set of specs and a gorgeous display to boot. Its competitors include the likes of Apple’s iPhone 6 Plus, LG’s G3 and the OnePlus One, but it seems like it will have one more to deal with soon enough. Word on the street is that the Nexus 6, also known as Motorola Shamu, is scheduled to launch later this month and the device is even bigger than the other ones.

Bigger isn’t always better, but is this case it might be as we’ll be comparing the Samsung Galaxy Note 4 and the Nexus 6, and size will certainly matter. However, there are many more aspects that need to be taken into consideration if we are to declare a winner so we will also be looking at specs, price, operating systems and more. While the Samsung Galaxy Note 4 is already available for purchase in certain markets, the Nexus 6 has not yet been launched, or indeed announced so we still don’t know all of the details. That being said, there are certainly lots of rumors regarding the device, but we’ll be looking only at the most believable ones in order to provide a relevant comparison. Without further ado, let’s kick off our Samsung Galaxy Note 4 vs Nexus 6 comparison.

The Samsung Galaxy Note 4 is one fine piece of technology and features one of the best smartphone displays of all time. We’re talking about a 5.7-inch Super AMOLED screen with 1440 x 2560 resolution and 515 pixel density. Few flagship smartphones out there can hold a candle to the Samsung Galaxy Note 4 when it comes to the display, but the Nexus 6 looks to be one of them. The latest rumors surrounding the upcoming device co-developed by Google and Motorola suggest that it will sport a massive 5.9-inch panel with 1440 x 2560 resolution and 498 ppi. The giant phablet was recently spotted in the wild and from the looks of it, these rumors are not exaggerated. The Nexus 6 seems to be able to give the Samsung Galaxy Note 4 a run for its money, but the latter does feature Super AMOLED technology, which makes for very realistic and vibrant colors.

Displays aside, the two also come with some very impressive sets of specs that put a lot of other phablets out there to shame. A quick peak under the hood of the Samsung Galaxy Note 4 reveals a Qualcomm Snapdragon 805 quad-core processor running at 2.7 GHz, complete with Adreno 420 GPU and 3 GB of RAM. There is also a variant that features an Exynos octa-core CPU with four Cortex A-53 cores clocked at 1.3 GHz and four Cortex A-57 cores clocked at 1.9 GHz. Benchmark results say that the two models are more or less similar in terms of performance, although the Snapdragon variant might have just a bit of an edge over the Exynos model. The Samsung Galaxy Note 4 also features a 16 MP primary camera with optical image stabilization, 32 GB of internal storage memory and a 3,220 mAh battery. Also worth noting is the fact that the Samsung Galaxy Note 4 has a microSD card slot that’s good for up to 128 GB of additional storage memory.

As for the Nexus 6, we don’t know its complete list of specs at this time, but if the rumors are true, the device might be able to match the Samsung Galaxy Note 4 in terms of performance. The Nexus 6 is also said to feature a Qualcomm Snapdragon 805 quad-core processor with Adreno 420 GPU and 3 GB of RAM. Its camera will likely be a 13 MP snapper with OIS and we can also expect to see a 3,200 mAh battery. Similar to the Samsung Galaxy Note 4, the Nexus 6 will also come equipped with 32 GB of internal storage memory and may or may not have a microSD card slot. There are very few rumors regarding the storage, but I suspect that we will in fact see a microSD card slot. However, this is just speculation so take it for what it is.

Thus far, our two competitors seem more or less evenly matched, but the Nexus 6 has a little trick up its sleeve. We mentioned earlier that the device was spotted in the wild, but we haven’t followed up with any further details. Well, a person was seen using it on a bus and it appeared that Shamu was running on Android L. Indeed, the Nexus 6 is believed to be the first device to run on the final build of the operating system and it seems like it already does. The Samsung Galaxy Note 4 currently runs on Android 4.4.4 KitKat and we may have to wait a while until it upgrades to the latest version. Samsung devices have traditionally lagged behind when it comes to OS updates and this will presumably not change in the near future. On the other hand, Android L is a major update so perhaps the company will make an effort to upgrade the Samsung Galaxy Note 4 in due time.

One last aspect that needs to be discussed is the price and unfortunately we’re a bit in the dark when it comes to this. The Nexus 6 is at least a couple of weeks away from being revealed and there are no details in regards to the price at the moment. However, Nexus devices have a reputation for being surprisingly affordable for what they offer so we hope that this trend will continue with the Nexus 6 as well. We can expect the device to be somewhat cheaper than the Samsung Galaxy Note 4, which will cost at least $700 when it arrives in the US later this month. This is what Verzion charges for a contract-free phablet and seems to be the cheapest offer at the moment. If you want to buy the phablet unlocked from a different carrier you will have to fork out at least $100 more.

Final thoughts? It’s hard to recommend anything just yet seeing as how the Nexus 6 has not been officially announced yet. We know plenty of cases when rumors turned out to be true, but it’s hard to say if this will also be such a case. We can at least be certain that the device will run on Android L and it’s a pretty safe bet that it will cost less than the Samsung Galaxy Note 4. However, the latter definitely has a lot going on for itself so it’s worth a purchase any day of the week regardless of the competition. The Nexus 6 is said to be announced on October 16th while the Samsung Galaxy Note 4 will only launch in the US on October 17th. We suggest that you wait until the Nexus 6 is unveiled if you plan on picking between the two just so you’ll know exactly what each of them has to offer.

I’m Load The Game’s co-founder and community manager, and whenever I’m not answering questions on social media platforms, I spend my time digging up the latest news and rumors and writing them up. That’s not to say I’m all work and no fun, not at all. If my spare time allows it, I like to engage in some good old fashioned online carnage. If it’s an MMO with swords and lots of PvP, I’m most likely in it. Oh, and if you’re looking to pick a fight in Tekken or Mortal Kombat, I’ll be more than happy to assist! Connect with me by email markjudge (@) loadthegame.com only
@@MarkJudgeLTG
Previous Far Cry 4’s ‘Weapons of Kyrat’ trailer is out
Next State of Decay sold over 2 million copies