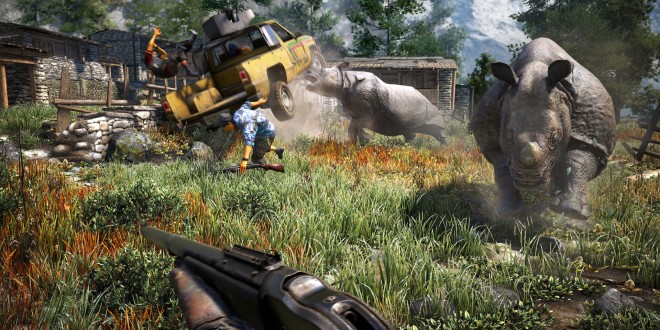 Far Cry 4’s ‘Weapons of Kyrat’ trailer is out

Publisher Ubisoft has released a brand new trailer for the upcoming first-person open-world action/adventure game set in the Himalayas, Far Cry 4. This latest video focuses on the game’s many weapons with which players will be able to cause mayhem across its many environments. Players will be able to rain fire on their enemies via mortars, grenade launchers, or machine guns – among many others – in addition to using auto crossbows (which, I assume will auto-target enemies, kind of like Titanfall’s smart pistol), and Kukri knives.

“This impressive arsenal of weaponry will be supplied to the player by a new and intriguing character”, reads the official press release. “Longinus admits to being a former warlord, and that he found God when he nearly died during a civil war in his country. After travelling with various religious missionary expeditions, he has followed a trail to the Himalayas and finds himself in Kyrat, caught up in another civil war that looks all too familiar. Longinus may have changed, but that doesn’t mean the lion has become the lamb. He’s willing to sell guns and supplies to the sheep while advocating that they fight for their freedom, because he knows from experience that warlords don’t simply go away…”

Far Cry 4′s story follows Ajay Ghale, an English-speaking Nepalese native who returns to Kyrat (a wild and untamed region of his home country) to scatter his mother’s ashes. Once there, he becomes caught up in a civil war, as the people struggle under the despotic regime of self-appointed king Pagan Min (Troy Baker). Far Cry 4 ensures that the open-world gameplay and story complement each other, unlike its prequel, where the open-world nature of the gameplay was often at odds with the plot, as it allowed the player to perform protracted acts of exploration despite situations in the narrative which were supposedly time-critical. In addition, the writers chose to minimise the amount of voice-over from the player-character to allow gamers to better immerse themselves in the role, and have added Tarantino-like dark humour, in order to address the contrast between the game’s heavy violence and any enjoyment the player will get from experiencing the game.

Far Cry 4 launches on November 18th in North America and Europe, and November 20th in Australia, on the PlayStation 4, Xbox One, PlayStation 3, Xbox 360, and PC.

I’m Load The Game’s co-founder and community manager, and whenever I’m not answering questions on social media platforms, I spend my time digging up the latest news and rumors and writing them up. That’s not to say I’m all work and no fun, not at all. If my spare time allows it, I like to engage in some good old fashioned online carnage. If it’s an MMO with swords and lots of PvP, I’m most likely in it. Oh, and if you’re looking to pick a fight in Tekken or Mortal Kombat, I’ll be more than happy to assist! Connect with me by email markjudge (@) loadthegame.com only
@@MarkJudgeLTG
Previous Quan Chi revealed for Mortal Kombat X
Next Samsung Galaxy Note 4 vs Nexus 6 – Big vs Bigger