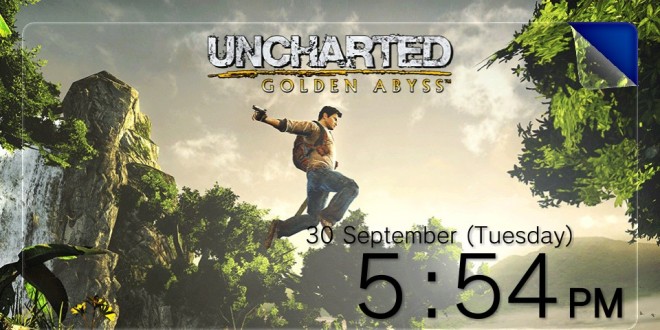 Starting today, users can download the PlayStation Vita system update v3.30, which enables Themes on the handheld console. According to Sony, after installing the update, users will be able to personalize their Start and Home screens, system application icons and the system’s background music. An example of how a Vita theme looks like can be seen in the featured image above, which depicts the Home screen of an “Uncharted”-based theme.

Starting tomorrow, you will be able to purchase and download non-game Themes from the PlayStation Store on the Vita console. Sony announced that themes from fan-favorite games such as Uncharted: Golden Abyss (shown above), Tearaway and Freedom Wars are coming soon. The company also adds that users will be able to manage downloaded themes through the PlayStation Vita’s Settings app.

The update also allows players to see how rare an obtained Trophy is, when viewing the respective section on the PlayStation Vita. Another novelty introduced by update 3.30 is that you can now send event files from your Calendar to your friends through Messages or Email. Additionally, you can add players that are not in your friend list to your events.

According to Sony, the Themes feature, which is one of the most requested functionalities by fans both on PlayStation 4 and PlayStation Vita, will hit their their next gen console soon. A cool thing about Themes on PlayStation Vita, that I forgot to mention is that you are not restricted to official themes. Sony confirmed through their blog that themes can be developed by any third party publisher and that more designs are on their way. Sony did not reveal an official price for the themes, but it shouldn’t be higher than $3, which was the average price of a PlayStation 3 theme.

For more details and images depicting several new themes Sony has prepared for their handheld console, head for the PlayStation blog. You can find several examples there, including the Uncharted one that I’ve placed at the top of this article.

I'm a journalism graduate and an occasional gamer. As a kid I used to own a NES clone called "Terminator 2", which was hugely popular in my country. I like old school games and adventure games but I occasionaly play RPG's and Shooters as well, though I wouldn't call myself an expert at these kinds of games. When I'm not writing or playing games I prefer reading detective or fantasy novels.
Previous The gap on the Samsung Galaxy Note 4 is actually a feature, not a flaw
Next Galaxy Note 4 vs Huawei Ascend Mate 7 – clash of titans