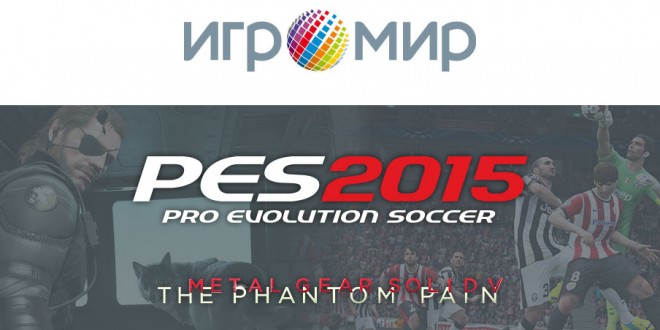 According to the publisher, the event takes place in Moscow, from the 2nd of October to the 5th of October. IgroMir also incorporates this year’s edition of the Russian Comic Con.

For Metal Gear Solid V: The Phantom Pain, Konami prepared a themed display, recreating a military setting like the ones seen in the game. The publisher will also show attendees a presentation that contains stunning footage from the game, showing the latest updates and a brand new in-game location. Metal Gear Solid V: The Phantom Pain is developed by Kojima Productions and published by Konami. It is slated for a 2015 release on PC, PlayStation 3, PlayStation 4, Xbox 360 and Xbox One.

The other game Konami is bringing to IgroMir is Pro Evolution Soccer 2015, shortened PES. The publisher will make available the most receint build of the game. They assure players that the new entry to the PES franchise has utterly responsive controls and unrestricted gameplay that gives users full control over how they play. Visitors will be able to play the game and see the new and improved features it offers. PES 2015 will be released on November 13 on PC, PlayStation 3, PlayStation 4, Xbox 360 and Xbox One.

Russian gamers who attend IgroMir will be able to visit panels from all the major game developers or publishers, such as 2K, EA Games, Bethesda, Microsoft, Sega, Square Enix, Ubisoft and many others. Also, Sony announced that they are bringing playable versions of their upcoming PlayStation exclusive games. In addition to these well-known companies, several Russian developers will also attend the event. For a full list and more details, you can check out the official website if you know Russian, or, if you don’t speak the language, check out this Google Translate version for a somewhat intelligible English translation.

I'm a journalism graduate and an occasional gamer. As a kid I used to own a NES clone called "Terminator 2", which was hugely popular in my country. I like old school games and adventure games but I occasionaly play RPG's and Shooters as well, though I wouldn't call myself an expert at these kinds of games. When I'm not writing or playing games I prefer reading detective or fantasy novels.
Previous State of Decay sold over 2 million copies
Next LG G3 vs Oppo Find 7 – titan vs underdog

The Silent Hill series has been on indefinite hiatus for several years now, with the ...