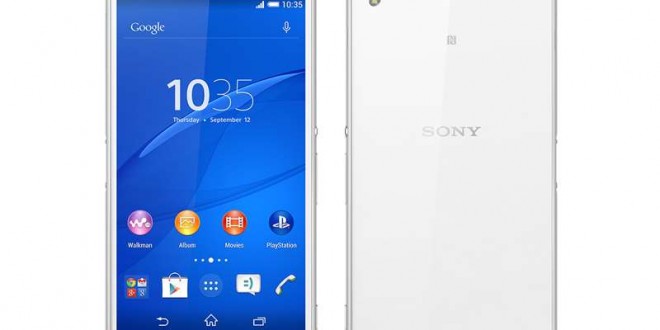 The Sony Xperia Z3V – V standing for Verizon is going to be iat Verizon Wireless starting October 23. Verizon will offer a great deal for the Sony Xperia Z3 and the Sony tablet, if you buy them in a bundle, with a $200 discount. The Sony Xperia Z3 will be waterproof and feature embedded wireless charging, PS4 Remote Play and a new camera application. The Sony Xperia Z3 camera will be a 20.7 MP camera with 4k video recording, as rumored before. Keep in mind that this is the Verizon exclusive Sony Xperia Z3, and it sports a design just a tad different than the original Xperia Z3.

The Verizon exclusive Sony Xperia Z3 will also be able to pair with other photography devices with the multi-camera app so that you can shoot an object from multiple angles at the same time. The handset also has HI-res audio as well as the option to broadcast your videos live. The new camera app from Sony is actually similar to the Eye Experience HTC was touting yesterday at the Double Exposure event.

The Verizon exclusive Sony Xperia Z3 will set you back $200 on contract. Sony will be providing Verizon with the Dual Shock Controller and a mount for the phone as well as a charging pad, as part of the Sony Xperia Z3 accessory line. Verizon will also launch the Sony Smartwatch 3 later this month, which is an unexpected piece of news.

Even though we expected to see a Sony Xperia Z3 Compact getting launched, it seems that that will be postponed for a later date. The T-Mobile version of the Xperia Z3 hasn’t been mentioned either, even though it should be launching later this month. The event was a short summary of what Verizon will be bringing to the U.S. and the execs kept the presentation brief and to the point. They haven’t mentioned an exact date or a price for the Sony Smartwatch 3 or an off-contract price for the Xperia Z3, but we’re sure to find those out soo.

My life-long dream has been to test out every gadget on the market! Considering the fact that I've rapidly destroyed almost every gadget I've had so far, I'm not inclined to owning something, so my ideal outcome would be to have a different gadget each month. I'm really into smartphones, wearables and tablets and I love Playstation and Xbox, I'm sure I'll beat you at your own game (after a month of training... or two)
Previous Facebook will not get any money out of WhatsApp any time soon
Next Son of Nor receives major update including new levels

We learned earlier this year that a remake of Demon’s Souls is set to launch ...