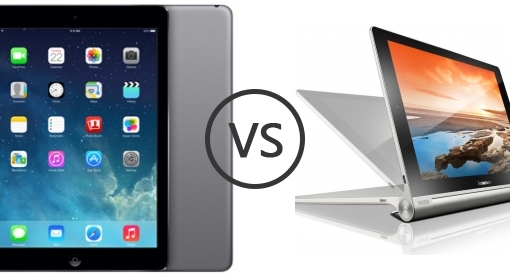 The Lenovo event this past week has honestly left me speechless and I really appreciate the company’s effort to create devices that cater to all kinds of people and audiences. The start of the show was the Lenovo Yoga Tablet 2 Pro with its built-in projector and JBL sound system, but the Yoga Tablet 2 isn’t bad either, especially because it is available in both Android and Windows 8.1 versions, as well as compact and larger versions. The iPad Air 2 should be coming to our doors soon as well, with Apple scheduling an October 16 event to launch the new tablet.

The Lenovo Yoga Tablet 2 comes as a cheap new addition to your gadget portfolio, with a $250 price for 8 inch model and a $300 price for the 10 inch model. The Yoga Tablet 2 is interesting because you get to choose whether you would like an Android tablet with full Google integration or a Windows 8.1 tablet with desktop integration, to use as a more multifunctional device. The Lenovo Yoga Tablet 2 comes with four modes, hold, stand, tilt and a new hang mode. The kickstand on the tablet has been improved to support more angles, which is a nice tweak Lenovo decided to include in its new line.

The iPad Air 2 is rumored to come in the standard silver and grey versions, as well as a new gold version to complement your gold iPhone 6 or iPhone 6 Plus. While the iPad Air 2 will maintain most of the design elements of its predecessor, the iPad Air, it will be a more lighter and thinner device, probably becoming a leading power in the tablet market in matters of design and footprint. The Gold iPad Air 2 should be a pretty nice device to sport and will surely attract many Apple fans, just as much as the new thing and light footprint of the device.

The Lenovo Yoga Tablet 2 line sports pretty handsome quad core ATOM CPUs, backed by 2 GB RAM and 16 GB of internal storage, expandable via microSD card. The screens on both the 8 inch and 10 inch versions have 1900*1200 resolution and offer pretty good viewing angles. The new Yoga Tablet 2 line also includes Dolby stereo speakers, for a great quality audio, as well as 8 MP rear camera and 1.6 MP front camera. The 10 inch Lenovo Yoga Tablet 2 measures 255 x 183 x 3-7.2mm and weighs 619 grams. The 8 inch model is 210 x 149 x 2.7-7mm and weighs 419 grams. The best thing about the Lenovo tablets is that they have LTE, Bluetooth and Wi-Fi, although LTE is said to be limited to certain countries, the U.S. not included.

The iPad Air 2 will be just 7 mm thick, with nomute/vibration button, the speakers now taking up a single row grill and the microphones have been repositioned. The iPad Air 2 will feature an 8MP primary camera along with a 5MP secondary shooter that will support 720 FaceTime video calls. The device will come equipped with an Apple A8 chipset with 2 GB of RAM and 32/64/128 GB internal storage variations. Apple is also including TouchID fingerprint home button and NFC connectivity for Apple Pay in the iPad Air 2. A 9.7 inch Retina display with a new type of anti-reflective coating will probably be featured, too. The display might also feature the pressure-sensitive input seen on the Apple Watch last month when Apple launched the iPhone 6 and iPhone 6 Plus.

The iPad Air 2 will be powered by Apple’s A8 CPU coupled with the M8 motion coprocessor. A leaked case with a mysterious opening near the camera opening suggests that the iPad Air 2 might benefit from laser autofocus as seen on the LG G3 or a much needed LED flash. Naturally, the gold iPad Air 2 and its silver and grey brothers will run iOS 8. As for size, the iPad Air 2 will probably measure 240 x 169.5 x 7 mm, and weigh around 400 grams, becoming one of the most compact and maneuverable tablets on the market.

The two new additions to the tablet market from Lenovo and Apple should compete with the Nexus 9, which is said to be released just a day before the iPad Air 2. These three compact tablets should become all the rage in the following weeks and so far the iPad Air 2 remains the most compact out of all of them, thanks to its light and thin footprint. The iPad Air 2 might be outdone by the Lenovo Yoga Tablet 2 because of its increasing functionality and different modes you can use thanks to its flexible stand. I would rather get my hands on the Lenovo Yoga Tablet 2 because of that kickstand than the pricey iPad Air 2, which will probably retail for around $500.

My life-long dream has been to test out every gadget on the market! Considering the fact that I've rapidly destroyed almost every gadget I've had so far, I'm not inclined to owning something, so my ideal outcome would be to have a different gadget each month. I'm really into smartphones, wearables and tablets and I love Playstation and Xbox, I'm sure I'll beat you at your own game (after a month of training... or two)
Previous PS4 vs Xbox One: Sony keeps widening the gap with each passing month
Next Mass Effect 4 will be featured in a panel at Honorcon 2014