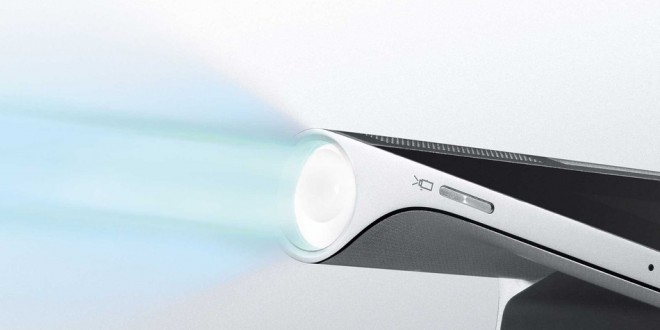 These two Yoga devices took the limelight at the event because they bring unique features and improvements to the convertible and tablet market, and I think Lenovo might be on to something when saying that they are putting the needs of the customers first. The Lenovo Yoga Tablet 2 Pro brings ultimate innovation, with a built-in projector and JBL sound system. The Yoga Tablet 2 Pro was built with customers needs in mind, Lenovo having done a survey among Lenovo Yoga users and came up with results that pointed towards the fact that most people used their tablets indoors and in the home, as well as with other people at the same time.

The survey, according to Lenovo, denoted the fact that most Yoga Tablet users wanted a device that would cater to media consumption and encompass a device that would be perfect for viewing videos and photos in high quality, and in groups or families. With that in mind, Lenovo decided to put a Piko mini projector into the Lenovo Yoga Tablet 2 Pro, so that it could project  inch screens on a preferably white wall in a dark room. Lenovo is the first company to put out a tablet that has a projector and high quality sound system incorporated. With this in mind, we can honestly say that Lenovo did manage to innovate with the new tablet and the Lenovo Yoga Tablet  Pro will surely become a success shortly.

The Lenovo Yoga 3 Pro, on the other hand, caters to a different type of consumer: the power user. The Lenovo Yoga 3 Pro is a convertible tablet which aims to cater to those who would like the mobility and flexibility of the tablet, but the performance and battery of a laptop computer. Thus, Lenovo brought out the successor to the Lenovo Yoga 2 Pro (which was quite the hit already) and made it even better.

The Lenovo Yoga 3 Pro is unique because of the watch-hinge that binds the tablet part to the keyboard part and allows for full 360 degree rotation, as well as an incredibly stable and balanced device. The convertible acts as a laptop and a tablet at the same time, with a great design and modern color schemes included. I was left impressed after viewing the live stream of the Lenovo event last week, seeing how people were holding the Lenovo Yoga 3 Pro device in any way you can think of, and the convertible keeping that shape, since it was actually designed to bend. You can have various usage modes with the convertible, including tent, hold, stand and laptop and the hinges are not only convenient, but stylish, in my opinion, giving a rugger, yet classy look to the device.

As for specs, both of the highlights of the Lenovo show can be called top-notch in their respective category. The Lenovo Yoga Tablet 2 Pro currently has no worthy rivals because it’s actually the first device to incorporate so many technologies that ultimately blend together and make for a great media consumption gadget. As we are used to from Lenovo, both the Yoga Tablet 2 Pro and Yoga 3 Pro incorporate high-end hardware as well as software, for user convenience, naturally.

The Lenovo Yoga Tablet 2 Pro will retail for $500 and will certainly be worth the hefty price, because in my mind it manages to replace the standard projector as well as the TV set in a home. Naturally, it doesn’t offer the same high resolution, crisp and bright display, but it still makes for a 50 inch screen which is quite the real estate you can get for average media consumption. I would gladly use a projector instead of a monitor or TV set to show friends and family photos and videos of my holidays, or just simply recreate a cinema experience right there in my (small) living room.

The Lenovo Yoga Tablet 2 Pro is also a good budget alternative for those who do a big deal of presentations, like students, teachers and businessmen, because it skips you of the sometimes lengthy process of having to couple a separate projector to your laptop or move your files and presentations to a device that is already coupled to a projector. Overall, the Lenovo Yoga Tablet 2 Pro is a really versatile device that has the potential of becoming a big hit among the average tablet user, as well as others.

The Lenovo Yoga Tablet 2 Pro also has the new standard Lenovo Yoga modes, including hold, stand, tilt and hang and the Harmony software Lenovo has developed will help you manage these modes and adjust your tablet according to the ways you are using it. Harmony can adjust your audio mode as well as viewing mode, and start or stop the apps you usually use when the Lenovo Yoga Tablet 2 Pro is set in a certain mode. Clearly, I’m pretty much fascinated by this device and I will surely add it to my gadget drawer soon enough.

Now, for the Lenovo Yoga 3 Pro. This convertible and its predecessor have been worthy competitors to the Microsoft Surface Pro line and aim to help power users get their hands on a device that will do all the work they need it to do, while remaining a small, thin device they can carry around in their briefcases of purses. The Lenovo Yoga 3 Pro is currently the thinnest convertible device you can find on the market, so that should definitely explain what kind of approach Lenovo is taking with its new line of devices.

The Lenovo Yoga 3 Pro is currently priced at a hefty $1350, but the device certainly brings hardware and software to match that price. The main selling point of the Yoga 3 Pro is that it’s more of a very thin and light laptop and a tablet on the heftier side, which still makes for a device that is much easier to handle than you would think, especially compared with behemoth laptops. The Lenovo Yoga 3 Pro has a 13.3 inch display with a 3200*1800 resolution and 276 ppi pixel density. The screen is protected by Gorilla Glass 3 and offers excellent viewing angles, even though it does tend to reflect a bit of light in very bright environments.

The Lenovo Yoga 3 Pro has a great LED-backlit keyboard with a touchpad and built-in mouse buttons. The Lenovo Yoga 3 Pro is powered by the newest generation of Intel CPUs, the dual-core Intel Core M-70 processor, which allows for a fanless design, in turn allowing Lenovo to create such a thin and light notebook convertible. The CPU runs at 1.1 GHz-2.6 GHz in Turbo mode, coupled with integrated Intel HD Graphics 5300 and backed by 8 GB RAM and 256 GB SSD.

The Lenovo Yoga 3 Pro should hold up for 9 hours of mixed use, which would be a great battery life for a convertible, although that hasn’t been thoroughly tested yet, so we’re not going to give a final opinion on the matter. Keep in mind, that Lenovo is known for managing to get great battery life in their devices, just think of the Lenovo Yoga Tablet which lasts for up to 18 hours of mixed use. If that’s not impressive, I don’t know what is. The Lenovo Yoga 3 Pro also runs on Windows 8.1, which means that it will allow for full desktop integration. That feature will surely come in handy for many power users who would like to replace their tablet and hefty laptop with a light-weight convertible device.

All in all, the two highlighted Lenovo devices, the Lenovo Yoga Tablet 2 Pro and Lenovo Yoga 3 Pro convertible do their part in making technology more advanced as well as more versatile. They offer smooth and varied experiences for different types of users and cater to specific categories of customers. Lenovo, in my opinion, has correctly identified the current needs of the masses and the new Lenovo Yoga line will surely become popular in the following months. Look out, iPad Air 2, because it might be hard to enter the market yet again with competitors like these.

My life-long dream has been to test out every gadget on the market! Considering the fact that I've rapidly destroyed almost every gadget I've had so far, I'm not inclined to owning something, so my ideal outcome would be to have a different gadget each month. I'm really into smartphones, wearables and tablets and I love Playstation and Xbox, I'm sure I'll beat you at your own game (after a month of training... or two)
Previous Sorcerer King – Beta 1.1 Patch now available
Next Developer estimates release date for Gran Turismo 7