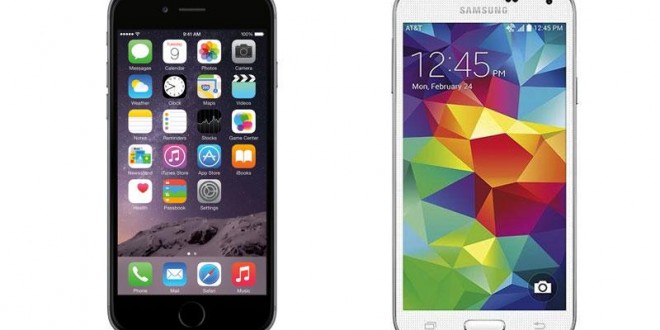 Apple iPhone 6 vs Samsung Galaxy S5 - which has the better bang for buck ratio?

The iPhone 6 and Galaxy S5 are two flagships of 2014 which have not only stirred a fair amount of hype before their release, but were launched with great success and were well-received. While the Galaxy S5 was launched at the beginning of Summer, the iPhone 6 marks the arrival of Fall with its September launch. Nonetheless, the Galaxy S5 and iPhone 6 size-up nicely next to each other and we can’t help but offer you up a comparison of sorts so that we can collectively determine which of these flagships has a better bang for buck ratio. While we’ve compared the iPhone 6 to the Galaxy S5 before, we had learned many things since, including a more exact pricing as well as the opportunity to test out the iPhone 6 as well as the Galaxy S5.

The iPhone 6 comes bundled with the new iOS 8 mobile OS, which is set for an update to version 8.1 on Monday, October 20. The Galaxy S5, while it is still on Android 4.4 KitKat is among the first flagships to receive the anticipated Android 5.0 Lollipop upgrade in the following month. Two flagships with two new operating systems would be a magnificent chance for a performance review, but alas, we still have to wait a bit for that to happen. Until then, let us see whether the iPhone 6 or the Galaxy S5 have better bang for buck ratios.

The iPhone 6 design would be the first item to address in this comparison, because the iPhone 6 is made up of an aluminium unibody with chamfered edges and a light, as well as thin build. While the materials of the iPhone 6 are nothing short of premium, we would have like to see smaller bezels and the absence of those white strips on the back. Nonetheless, the iPhone 6 feels great in the hand, and in the pocket, and promises a pretty long life. The Galaxy S5, on the other hand, was criticized for the design Samsung used. The Galaxy S5 has a polycarbonate body with a dimpled back panel and faux chrome finish on its frame. We have to admit, that the Galaxy S5 might seem a tacky flagship, but it still remains durable and well-built, handling roughness well.

The Samsung Galaxy S5 does have an advantage to its polycarbonate build, compared to the iPhone 6. While the iPhone 6 won’t really hold out under water, the Galaxy S5 has IP67 certification, so you won’t have to worry about taking it in the shower with you. Not that that’s a usual thing to do with your $700 smartphone. And then there’s the price issue. The main idea behind buying on a budget is that you review your purchase before coughing up the cash. The bang for buck ratio basically means that a flagship, like the Galaxy S5 or Apple iPhone 6, offers just as much and more, than other flagships in its price range. The Galaxy S5 retails for $700 off-contract, depending on the retailer a bit. The iPhone 6 price is $650 for the 16 GB storage version, $750 for the 64 GB version and $850 for the 128 GB version. Oh, the Galaxy S5 has a microSD card slot that handles up to 128 GB storage. If you are thinking about bang for buck ratio, this does not look well for the iPhone 6 at the moment. Charging $100 just for a memory upgrade instead of building in a microSD card slot says a lot about Apple. Nonetheless, the basic model of the iPhone and Galaxy S5 size up well next to each other. On the other hand, 16 GB of storage on your phone doesn’t tend to be enough nowadays, but you do have great cloud storage services you can use instead. That’s iCloud on the iPhone 6.

The Galaxy S5 has a 5.1 inch 1080*1920 resolution display, while the iPhone 6 sports a 4.7 inch 750*1334 resolution screen. While Retina display tends to impress, we did like the Galaxy S5 display more, although it did encounter some color reproduction issues here and there. Otherwise, the Super AMOLED Galaxy S5 screen is bright, crisp and vivid and gets pretty good outdoor visibility. The iPhone 6 display isn’t bad, but we think that Apple could have done way better than that. With that in mind, pixel density on the iPhone 6 is 326 ppi, while on the Galaxy S5 it’s 432 ppi. When it comes to display, the Galaxy S5 does offer a better bang for buck ratio. On the other hand, the Galaxy S5 is larger and thicker than the iPhone 6, which feels great in the hand and is great to handle even one-handed. While the Galaxy S5 isn’t that large, and doesn’t pose much difficulty in handling the flagship, the iPhone 6 would be better for those who have small hands or enjoy properly and easily using their smartphone.

The iPhone 6, coupled with iOS 8 bring new services like Apple Pay, HealthKit and Homekit, which will certainly come in handy for those of you who like to digitize your life as well as those who tend to be on the run a lot, do online shopping a lot, as well as have the budget for full home automation and various fitness tracking gadgets. I don’t have the time, nor the funds, to keep that much in shape, but if I did, I would certainly love the new features Apple has put into iOS 8 and Apple Pay, and the iPhone 6 subsequently. The Galaxy S5 doesn’t have an Apple Pay service to boast with, but it does have an improved TouchWiz UI, as well as a pretty impressive S Health app which does the same thing HealthKit does, save for the Mayo Clinic integration.

The Galaxy S5 runs on the Snapdragon 801 CPU with Adreno 330 GPU, backed by 2 GB RAM and either 16 or 32 GB internal storage. The iPhone 6 runs on Apple’s own A8 chipset, with the M8 coprocessor on board, backed by 1 GB and the aforementioned 16, 64 and 128 GB storage versions. We have no complaints regarding either flagship when it comes to performance. Both the iPhone 6 and Galaxy S5 can get through intensive use with ease and perform anything you throw at it with ease. While iOS 8 did have its issues when it first came out, subsequent updates have resolved most of them, and Mondays iOS 8.1 update should finalize the improvements. If you are set on getting a phone that will run anything you throw at it smoothly and without issue, both of these will do just fine for your preferences. I would rather advise to choose based on OS, focusing on whether you like iOS 8 or Android KitKat, although KitKat will soon be replaced with Android 5.0 Lollipop.

The iPhone 6 camera on the rear is an 8 MP iSight sensor, which has great manual customization and produces high quality photos. We have no beef with the iPhone 6 camera, although Apple could have made it even better with a wider angle, more MP and optical image stabilization (as seen on the iPhone 6 Plus). Nonetheless, the iPhone 6 takes great photos, handles itself well even in low-light conditions and has an easy to use user interface. The front camera on the iPhone 6 is a pretty generic 1.2 MP sensor. The Galaxy S5 camera is a 16 MP sensor on the rear, and 2 MP on the front. The Galaxy S5 camera doesn’t have the optical image stabilization that would have made it superior to the iPhone 6 sensor, and does encounter issues in low-light conditions, even if it produces images with more detail and crisper colors. I’d say that concerning cameras, we have got a tie between the iPhone 6 and Galaxy S5.

The iPhone 6 battery is a 1810 mAH one, and many users say that while battery life is acceptable, holding out for about a day and a half with moderate use, it would have been easy for Apple to put in a bigger battery and sacrifice the thinness of the iPhone 6. Polls and surveys conducted all around the internet resulted that most people who own iPhone 6 units would have rather bought a ticker iPhone with a bigger battery. They said that the thinness of the iPhone 6 actually makes them feel as if they were holding something very gentle in their hands and were always fearful of dropping it. In any case, the iPhone 6 battery is average and fit for a device with a smaller screen. The Galaxy S5 has a much larger 2800 mAH battery, which gets about the same results as the iPhone 6 battery. The Galaxy S5 needs more to power the pixels on its screen and AMOLED displays are known to be power-consuming. In conclusion, no matter which you choose, the battery life on your Galaxy S or iPhone 6 will be just a big above average with moderate use. If you’re going for a minimum of two days of battery life, look at the Xperia Z3 or the Galaxy Note 4.

So what do you think? Which has the better bang for buck ratio? The iPhone 6 makes a good case with the smooth TouchID, slim design, aluminium unibody, good camera and the updated iOS 8, but the Galaxy S5 fares equally well with a lower price, microSD card slot, customizable Android 5.0 Lollipop, bigger and brighter screen, as well as software features. I would actually call this a tie, because both devices offer high-end specs and performance. Nonetheless, the storage issue, as well as the better screen and IP67 certification put the Galaxy S5 ahead of the iPhone 6. I would rather pay $700 for a device that will survive a drop in water, a stay in my pocket and looks great while doing it (on account of the thinner bezels), than pay $850 for a device that has accurate fingerprint scanning, Apple Pay and a good camera. Keep in mind, that it’s my personal opinion and is influenced by finances, geographical location as well as OS preference. I am an Android fan and I can’t wait to get my hands on Android 5.0 Lollipop. In any case, which would you say has the better bang for buck ratio?

My life-long dream has been to test out every gadget on the market! Considering the fact that I've rapidly destroyed almost every gadget I've had so far, I'm not inclined to owning something, so my ideal outcome would be to have a different gadget each month. I'm really into smartphones, wearables and tablets and I love Playstation and Xbox, I'm sure I'll beat you at your own game (after a month of training... or two)
Previous Free cloud services top 5 – safely store files
Next Why Lords of the Fallen isn’t coming to last-gen consoles