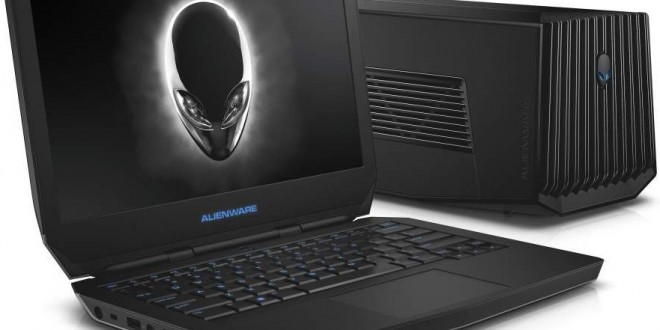 Gaming laptops have always debuted with an obvious performance disadvantage compared to their desktop counterparts, but that’s no longer the case. This is all thanks to Alienware’s new Graphics Amplifier. The gaming giant has built this standalone Graphics Unit with one thing in mind: to satisfy laptop gamers’ longstanding demands of desktop class performance for their portable gaming devices. Alienware 13 is the gaming laptop that will work in tandem with this Graphics Amplifier to provide the ultimate graphics output we’ve only seen in desktop PCs until now. The Alienware Graphics Amplifier is priced at $299, and it is pretty much a fancy looking box housing two PCI-Express x4 and x16 slots, 4 USB 3.0 ports, and a 460 Watt Multi-GPU power supply, although the unit can only accommodate a single double-slot-wide graphics card.

Chassis lighting and AlienFX System Lighting will be showcasing this stunning graphics peripheral. Alienware’s Graphics Amplifier can fire up any desktop graphics card that can be fitted into its chassis. Simply connect it to the Alienware 13 gaming laptop and you’ll be able to enjoy high-end desktop performance in no time. The setup is simple and quick; a system reboot will be needed and that’s about it. Unfortunately, the graphics card housed by the Graphics Amplifier cannot run in SLI or CrossFire setups with the notebook’s built-in graphics adapter. However, Alienware might implement that option at a later date. While many companies introduced the idea of connecting an external PCIe graphics card to a gaming laptop, Alienware is the only one that has managed to do so efficiently and at a reasonable price of $299. Taking into account the high costs involved in the periodic upgrades of gaming laptops, Alienware’s Graphics Amplifier might prove an inspired and cheap solution over time. 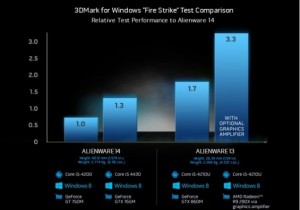 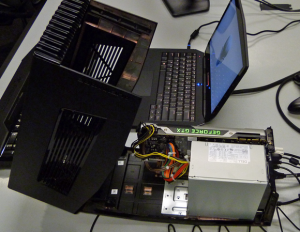 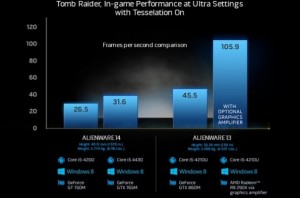 Focusing on the powerful gaming tool that will function in tandem with the Graphics Amplifier, the Alienware 13 gaming laptop, all we know is that this portable rig packs a lot of power. Featuring a 13.3” screen, this machine will initially be fueled by an Intel Core i5-4210U processor (dual-core, up to 2.7GHz) and an NVIDIA GeForce GTX 860M GPU, with 2GB of GDDR5 memory. New CPU and GPU variants will be announced in the future. The maximum RAM memory for the Alienware 13 is set at 16GB DDR3. In the system storage department, users will have the option of installing two drives: one standard 2.5″ and an M.2 drive. Also, Alienware will be building systems with up to 512GB SSDs. The Alienware 13 base model will be $999, while the top model will cost $1599. What do you think of Alienware’s latest breakthrough?

I'm Razvan, a sports and first-person shooter enthusiast. I've always loved writing, even more so when it involves games. When I'm not playing on my PS3 or writing, I like to run exhausting cardio workouts, play soccer, watch a good movie, or read a good book.
Previous Call of Duty Advanced Warfare DLC packs receive names and pricing
Next Oppo N3 announced along with the Oppo R5, the world’s thinnest smartphone 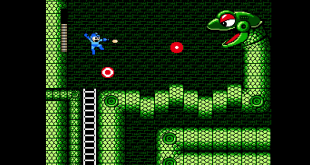