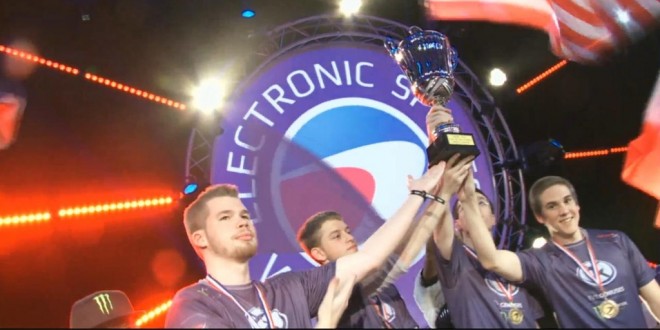 Call of Duty Advanced Warfare is out, and with it a new age for the popular FPS series has begun. The previous age ended with Call of Duty Ghosts, a game that further cemented the franchise’s place on the eSports scene. This past weekend, the last Ghosts tournament took place in Paris as part of the Electronic Sports World Cup. The Call of Duty Ghosts tournament was just one of many competitions that took place at the event, but it was of particular interest to many eSports fans given that it was the last of its kind. The team who walked home with the grand prize was none other than Evil Geniuses, a team that is widely considered to be the best Call of Duty team of all time.

Team Evil Geniuses won $12,500 and got to keep their ESWC title by defeating the British team TCM Gaming in the final with 3-1. However, the true reward is that team EG were able to win their last ever tournament under the current roster. Patrick “Aches” Price, Ian “Crimsix” Porter, Kenneth “Dedo” Dedo have all announced recently that they will be leaving Evil Geniuses in the near future. They planned to stick together for one final big tournament, so at least they’re left with some pretty good memories from the Call of Duty Ghosts era. As for what comes next after this, the players will start looking for new teams for Call of Duty Advanced Warfare, although no specific details have been revealed as of yet.

For now, all three players are still under contract with Evil Geniuses and appear on the official roster along with Tyler “TeePee” Polchow. It’s possible that at least one or two of the players might stick around for a while and see what kind of Advanced Warfare division EG puts together, but that’s rather unlikely scenario. In any case, pro teams for the latest Call of Duty are already forming, so the players would be wise to start looking for a new team as soon as possible because EG still hasn’t made any announcements regarding a possible Advanced Warfare division as of yet.

I’m Load The Game’s co-founder and community manager, and whenever I’m not answering questions on social media platforms, I spend my time digging up the latest news and rumors and writing them up. That’s not to say I’m all work and no fun, not at all. If my spare time allows it, I like to engage in some good old fashioned online carnage. If it’s an MMO with swords and lots of PvP, I’m most likely in it. Oh, and if you’re looking to pick a fight in Tekken or Mortal Kombat, I’ll be more than happy to assist! Connect with me by email markjudge (@) loadthegame.com only
@@MarkJudgeLTG
Previous Apple University going to China
Next Android Lollipop update coming to HTC flagships in 90 days