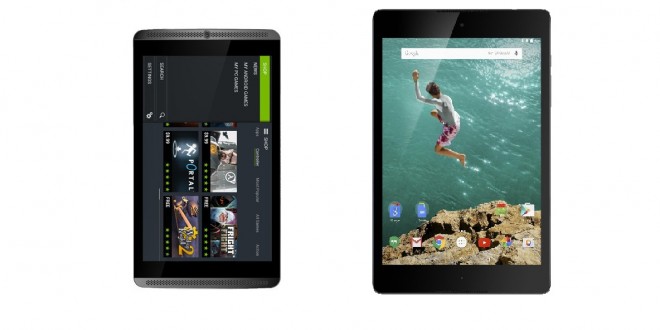 Two of the most anticipated, and later acclaimed tablets of the year are the Nvidia Shield Tablet and the HTC Nexus 9. While other tablets like the iPad Air 2 and iPad Mini 3 have also been recently released, people outside the Apple ecosystem tend to gravitate towards these two powerful tablets. While the Nvidia Shield Tablet is the successor of the Shield Portable, and as such it is intended for intensive gaming, the Nexus 9 encompasses gaming and an entertainment center in one neat slate.

When it comes to buying a new tablet, or upgrading from an older model, you should definitely check out these two options, because they are included in most buyer’s guides among the top tablets of the year. Even though both have prices a little on the hefty side, both are excellent examples of how hardware and software can be combined to provide an excellent multimedia experience for the user.

The Nexus 9 is the more recent iteration of an Android tablet and the first pro we need to mention is that it comes with Android 5.0 Lollipop out of the box. Android 5.0 Lollipop is the latest mobile operating system from Google, with 64 bit support, Material Design and a ton of new features users can enjoy. The Nexus 9 is the more expensive tablet compared to the Nvidia Shield Tablet, but both offer great bang for buck if we check out their spec sheets and some user reviews. The Nvidia Shield Tablet is aimed at gamers and can be a substitute for Steam machines. The drawback of the Shield Tablet is that it is a bit on the hefty side compared to the Shield Portable and it has a bulky controller.

The Nexus 9 is appreciated, aside from Android 5.0 Lollipop, because of its ideal aspect ratio (4:3), knock to wake and HTC BoomSound speakers, which are among the best speakers for smartphones and tablets you can find. At the same time, we didn’t expect the Nexus 9 price to be so high, the design could have been better, the display quality could have been better and we honestly thought we would see a microSD card slot somewhere, since it is a Google tablet. Let’s get to the specs and features of each these slates to see how they size up next to each other.

The Nexus 9 is a powerhouse nonetheless, and if you want something that is the high-point of Google and HTC, and can be called a future-proof device, the slate shouldn’t disappoint you. The Nexus 9 is one of the best tablets on the market, but is hasn’t become the best yet. Many say that the iPad Air 2 is a better option than the Nexus 9 and Nvidia Shield Tablet, but we suppose that depends on user preference rather than tablet specifications. In any case, I would choose the Nvidia Shield Tablet because it has a microSD card slot. I would choose the Nexus 9 for the bigger screen and better resolution, as well as for the heftier battery. Which is your dream-tablet?

My life-long dream has been to test out every gadget on the market! Considering the fact that I've rapidly destroyed almost every gadget I've had so far, I'm not inclined to owning something, so my ideal outcome would be to have a different gadget each month. I'm really into smartphones, wearables and tablets and I love Playstation and Xbox, I'm sure I'll beat you at your own game (after a month of training... or two)
Previous Trump shares his toughts on the upcoming Hearthstone expansion, Goblins vs Gnomes
Next Leaked Specs of the Radeon R9 390X reveal 4GB of 3D Stacked HBM and 4096 Stream Processors