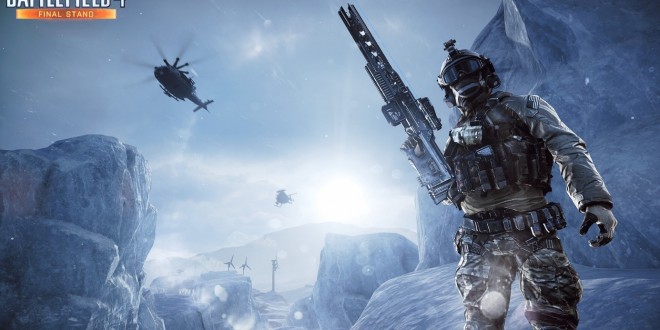 Electronics Arts and DICE have just released their latest Battlefield 4 DLC, the Final Stand, which is currently available exclusively to premium members of the game. The remainder of the Battlefield 4 crowd will be getting the Final Stand DLC this December 2nd. It’s worth pointing out that Final Stand is available on all platforms. To celebrate this early exclusive release of the expansion, EA has published an official gameplay trailer which I have to say looks stunning. Developers have really made an inspired choice by introducing four new wintry maps into the game that will certainly add to the level of excitement and will test the players’ combat skills in harsh environments.

More specifically, players will be battling it out in old mother Russia, suppressing heavy fire every step of the way. Giants of Karelia, Hammerhead, Hangar 21, and Operation Whiteout have their own secrets and perks. While Giants of Karelia shelters a high-tech weapons factory, Hangar 21 is the place where military secrets and battlefield plans can be exploited. Operation Whiteout will send you in the heart of Siberia where you’ll have to move quickly and choose your strategy wisely to come out in one piece. The mountainous Hammerhead is home to a secret submarine base that awaits to be explored. The Final Stand DLC also introduces a series of Hi-Tech toys which will prove useful in battle. These include new military vehicles, target detectors, drones, and high precision sniper rifles. Take a look at the official Final Stand gameplay trailer:

DICE has also released an extensive update for Battlefield 4 Final Stand upon release, which addresses both the game and server side of the expansion. This may come as a relief for those premium members which now have access to the new DLC, as developers have touched upon a large array of issues that needed immediate attention. Hopefully, major problems will not make an appearance in the new Final Stand DLC.

I'm Razvan, a sports and first-person shooter enthusiast. I've always loved writing, even more so when it involves games. When I'm not playing on my PS3 or writing, I like to run exhausting cardio workouts, play soccer, watch a good movie, or read a good book.
Previous DriveClub update 1.07 introduces a series of new features
Next Dota 2: New hero, treasure, creep models, Compendium reward, and more coming with the next update