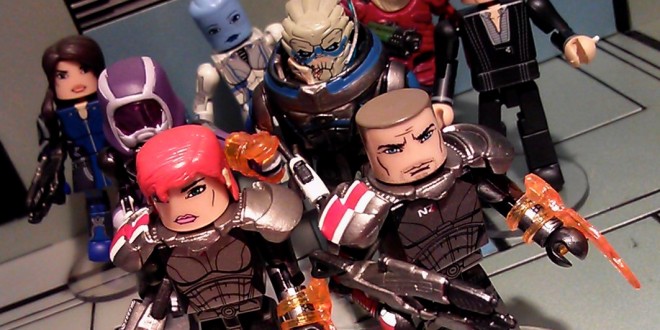 Mass Effect can now be yours for a mere $3.74 as a part of the massive Black Friday sale through EA Games. Gamers can grab up to 300 titles and DLC at massive discounts through Origin, EA’s digital distribution service. Have zero plans for the long weekend? You can also download the entire Mass Effect trilogy to your PC and save the galaxy from the reapers (while avoiding your aunt’s boring stories) for $14.99 at Origin.

While Mass Effect fans anxiously await any scraps of information that BioWare is willing to give out about Mass Effect 4, GameStop has decided that now’s the time to try and get into your pants. What do I mean? Diamond Select Toys has released the first wave of (not so) cute pocket sized Mass Effect Minimates figures that will be sold through GameStop.

It will be a bit of a challenge to complete your Mass Effect Minimates collection since they will be sold in opaque bags. That means that if you want to get your favorite Mass Effect character in your pants, you’ll have to spend plenty of time squeezing sacks to try and figure out which one you’re getting. (I know, I couldn’t resist.) There is a risk of getting double Minimates, even if you’re feeling around the sacks as attentively as you can, so we don’t know how good a strategy the packaging actually is.

So who can you deem pocket-worthy from the Mass Effect universe? The first set of Minimates will include MaleShep and FemShep, Ashley, Liara, Garrus, Tali, Wrex, and the Illusive Man. And much like the mysterious Cigarette Smoking Man from the X-Files, Mass Effect’s own cigarette smoking enigma, the Illusive Man, will indeed be (ahem) illusive as his figure will be a limited release. Even though the Mass Effect Minimates look a bit odd, they are a good gift idea for your gaming friends or yourself, depending on how excited you are about the Black Friday sale.

I’m Load The Game’s co-founder and community manager, and whenever I’m not answering questions on social media platforms, I spend my time digging up the latest news and rumors and writing them up. That’s not to say I’m all work and no fun, not at all. If my spare time allows it, I like to engage in some good old fashioned online carnage. If it’s an MMO with swords and lots of PvP, I’m most likely in it. Oh, and if you’re looking to pick a fight in Tekken or Mortal Kombat, I’ll be more than happy to assist! Connect with me by email markjudge (@) loadthegame.com only
@@MarkJudgeLTG
Previous Activision Removing Call of Duty Exploit Videos
Next League of Legends New Champion Rek’Sai Unleashed