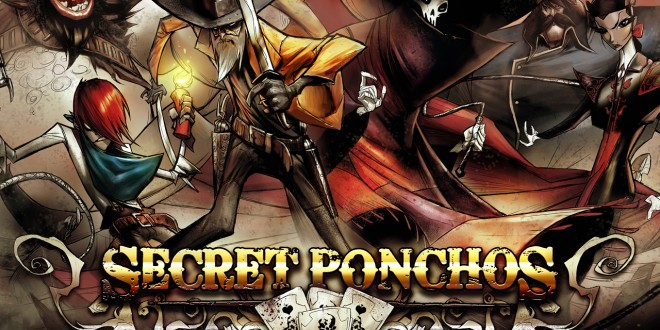 Secret Ponchos, the first release by developer Switchblade Monkeys, will be available on PlayStation 4 beginning December 2nd. The Secret Ponchos launch will include five playable characters and a variety of player configurations, game modes and maps.

Secret Ponchos is a competitive online shooter set in the wild west that features a top down isometric view which changes the feel of combat from that of traditional fighting and team combat games. This heavily stylized title from Switchblade Monkeys draws much of its influence from graphic novels which results in its distinctive and appealing character design.

This spaghetti western combat game has been described as a mix of League of Legends and Team Fortress because of the style of combat, the unique camera angle and the environmental and skill utilization that’s required to succeed. Street Fighter II’s fingerprints are also all over the game because of the tactical thinking necessary to become a top level player. How? As Switchblade Monkeys’ creative director and president Yousuf Mapara explains, “A fight between Ryu and Chun-Li is a completely different fight from Ryu and Dhalsim because of the spacing. It’s up to the players to impose their spacing on their opponents.”

The Switchblade Monkeys team incorporates all of these eclectic influences into player configurations like 1v1, 4v4, 8 player free for all in game modes such as Deathmatch, Domination, and Free-for-All. All of these options are available to test the mettle of the five characters that will be available with the December 2nd PlayStation 4 launch of Secret Ponchos. The five outlaws you’ll get to meet next week are named Phantom Poncho, Killer, Kid Red, Deserter and Matador.

With such unique influences combined with wonderfully stylized environments and characters, Switchblade Monkeys’ Secret Ponchos looks to be a fun and interesting first release. I don’t know about you, but I am looking forward to giving Secret Ponchos a shot.

I’m Load The Game’s co-founder and community manager, and whenever I’m not answering questions on social media platforms, I spend my time digging up the latest news and rumors and writing them up. That’s not to say I’m all work and no fun, not at all. If my spare time allows it, I like to engage in some good old fashioned online carnage. If it’s an MMO with swords and lots of PvP, I’m most likely in it. Oh, and if you’re looking to pick a fight in Tekken or Mortal Kombat, I’ll be more than happy to assist! Connect with me by email markjudge (@) loadthegame.com only
@@MarkJudgeLTG
Previous Square Enix Will Announce New RPG Next Month
Next Criminal Girls: Invite Only Coming in February