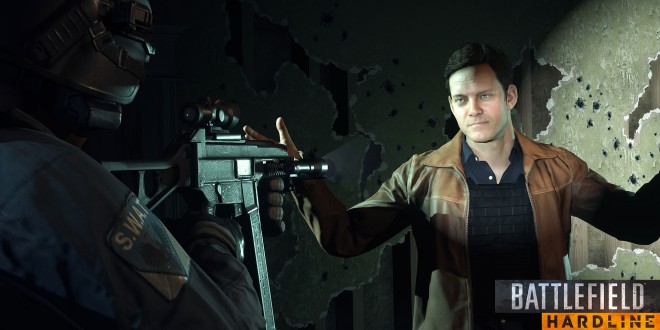 Battlefield Hardline’s campaign is stealth focused according to previews published by various other sites who were given hands on time with the upcoming game. Hardline is the next entry in the popular Battlefield series, EA’s answer to Activision’s Call of Duty. However, Hardline was initially to be released this October but fell through to March 17 of next year. GameSpot and Wired played two chapters of it and both reported on a very different approach.

Battlefield has generally been about destruction and large multiplayer battles. Destruction of the setting you were fighting in took priority in Bad Company 2, while Battlefield 4 brought large 64 player battles to consoles for the first time. Unfortunately EA and DICE have had to do damage control due to Battlefield 4’s troubled launch. Battlefield Hardline’s campaign is being handled by Visceral, the folks behind Dead Space, and takes a different approach to the brand. Instead of a soldier you are now an officer and gameplay is very reminiscent of Far Cry. You have a scanner which marks enemies, you can perform silent takedowns from behind, and can even throw coins in order to lure enemies into a hidden area or to distract them. Not only that, but enemies have an alertness meter which indicates how close you are to being seen, straight out of Far Cry. Unlike Far Cry, you will be handcuffing and knocking out enemies instead of gouging out their innards with a huge knife. You can even pull out your badge and cause your foes to disarm themselves.

Also taking cues from other stealth games, Battlefield Hardline’s campaign has a “last known position” feature, where enemies will go to where they believe you are, or where you were last seen in the open. This is brought in from Splinter Cell Conviction and Blacklist, where escaping into cover would show the player a silhoutte of their character. The white shadow was a representation of where enemies believe you were located, allowing you to flank or sneak out.

This type of gameplay was already shown off at EA’s Gamescom press conference, but it is nice to hear that the demo wasn’t just a one off mission and instead Battlefield will be going into a different direction from the usual dude-bro explosion heavy campaigns we see in most every first person shooter. Battlefield Hardline is set to release on March 17, 2015 on PC, PS4, PS3, Xbox One and Xbox 360.